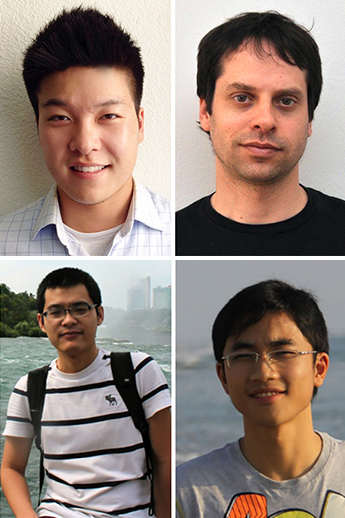 On September 15, 2016, members of the Columbia University Department of Systems Biology gathered in Tarrytown, New York for the Department’s annual retreat. Although the tranquil setting overlooking the Hudson River was familiar, the event’s timing was new, taking place for the first time at the beginning of the academic year to enable first-year graduate students to become acquainted with the Department as they begin their studies. With a full day of scientific talks, a poster session, and ample time for informal conversation, the retreat provided an up-to-date survey of the diverse research taking place in the Department's laboratories.

In introductory remarks, Department Chair Andrea Califano celebrated the retreat as an important annual meeting that provides “a chance to bring our heads together and think about what we are as a community.” He then gave a brief update on recent developments in the Department — including the interdisciplinary and collaborative nature of its research, its growing emphasis on technology development, the high publishing productivity among its investigators, and its successful pipeline of funded grants.

Among these is a new U54 grant that has enabled the creation of the Center for Cancer Systems Therapeutics (CaST). Shannon Hughes, a program officer in the National Cancer Institute’s Division of Cancer Biology, followed Dr. Califano at the podium to introduce the new Cancer Systems Biology Consortium, of which CaST is one of four founding centers.

Following her remarks, Peter Sims, who recently became director of the Department of Systems Biology’s Graduate Program, discussed recent changes in the systems biology PhD track’s curriculum and requirements and the launch of a new faculty research seminar.

Once the introductory remarks were past, the day’s program of scientific talks began, with Department of Systems Biology faculty members focusing on recent publications and new, unpublished research. (See the program of talks here.)

An additional key component of the day was a poster session that provided a forum for graduate students and postdocs to present and discuss their recent work with other attendees. At the end of the event, a panel of judges made up of Yufeng Shen, Nicholas Tatonetti, and Chaolin Zhang recognized four winners in the Best Poster Competition — Alexander Hsieh, Rotem Rubinstein, Jiguang Wang, and Jinzhou Yuan.

Alexander Hsieh, a graduate student in Yufeng Shen’s lab, presented a method that uses whole-exome sequencing data to detect a class of single nucleotide genetic variants (SNVs) called mosaic mutations. Mosaic mutations are mutations that occur after an egg is fertilized and so are not inherited from a parent, but result in two or more cell populations with distinct genotypes in the same individual. Hsieh’s computational approach is exploring such questions as how many mosaic mutations we might expect to see in an individual and whether these mutations have interesting properties. By studying single nucleotide variants in a data set from the Pediatric Cardiac Genomics Consortium, he found that disease-causing de novo SNVs may be less likely to be mosaic mutations. In ongoing work, he plans to apply his analytical method to other datasets.

Rotem Rubinstein, a postdoctoral research scientist in Barry Honig’s lab, explained recent work focusing on a class of cell adhesion proteins called protocadherins. These proteins allow neurons to distinguish self from non-self, but how they do so has been a mystery, particularly because there are less than 60 isoforms of protocadherins, and the human brain has billions of neurons. This phenomenon is important because it is a key factor in the formation of neural signaling networks in the brain. Using x-ray crystallography, bioinformatics, cell aggregation assays, and biophysical analysis Rubinstein and his colleagues identified specific residues that provide protocadherins with the ability to specifically prefer self-interaction to non-self-interactions. They also demonstrated that protocadherins interact on the same membrane in a non-specific way, forming cis dimers. Based on these findings, Rubinstein presented two possible models of protocadherin interactions. They are currently performing experiments to determine which is correct.

Jiguang Wang, an associate research scientist in the Rabadan Lab, discussed his recent studies of tumor evolution in glioblastoma (GBM), the most common and deadly type of primary brain cancer. By analyzing genomic and gene expression data as the disease changes from diagnosis to relapse, Wang and colleagues identified a branching pattern of clonal replacement in which gene expression changes dramatically over time. They also showed that while samples from nearby locations in the same tumor are similar both in their genomic and expression signatures, multifocal and recurrent tumors have diverse signatures within a single patient, suggesting what the researchers call a “multiverse” model. In such tumors, this leads different regions of the tumor to respond to anticancer drugs in different ways. Nevertheless, they found that mutations in a gene called PIK3CA sit at a trunk in the tree of GBM evolution, and so may offer a therapeutic opportunity for treating glioblastomas that have multiple lesions.

Postdoc Jinzhou Yuan discussed a new microwell array-based technology being developed and tested in the Sims Lab that is making it possible to perform rapid, inexpensive, and highly sensitive mRNA sequencing on thousands of individual cells simultaneously. Using the technology, Yuan assessed the heterogeneity of gene expression in human glioblastoma surgical specimens with single-cell resolution. The study, carried out in collaboration with the laboratories of Columbia University investigators Jeffrey Bruce, Peter Canoll, Anna Lasorella, and Antonio Iavarone, demonstrates the technology’s ability to distinguish closely related cell types found in the human brain. They also assessed the level of cross-contamination among microwells, finding that their method generated an extremely pure readout for each cell. Future plans include using the technology to generate single cell RNA-seq datasets from additional samples and performing new types of analysis on these datasets, including identifying new biomarkers as well as detecting copy number variations and single nucleotide polymorphisms at the single cell level.

These, and the diverse program of other posters and oral presentations provided a multifaceted snapshot of current research interests across the Department of Systems Biology, as well as the important contributions that young investigators make to research at Columbia.