Synapses mediate communication between neurons in the brain, making them critical components for neurological activity. Research has shown that synaptic loss and dysfunction play roles in a number of debilitating brain disorders — including Alzheimer’s disease, major depressive disorder, and autism — but currently no effective method exists for identifying and imaging individual synapses in living human brains. Being able to locate and quantify synapses in patients could greatly improve the diagnosis and monitoring of disease, and potentially offer new approaches for treatment.

Clarissa Waites, an assistant professor of pathology and cell biology at the Columbia University College of Physicians & Surgeons, and Dalibor Sames in the Columbia University Department of Chemistry, have recently embarked on a collaboration with the Columbia Genome Center High-Throughput Screening Facility with the goal of identifying small fluorescent molecules that can selectively localize to synapses. If successful, this project could for the first time provide a method for targeting and imaging synapses in the living human brain.

For many years, scientists have used green fluorescent protein (GFP) to label synapses in animal models of disease. Using genetic engineering, researchers incorporate a gene that codes for the protein into the mouse genome and fuse the glowing protein with synaptic molecules. Once the protein is expressed in live mice, it emits a stable signal that can be observed using two-photon microscopy, indicating the locations of these GFP-labeled synaptic molecules. But although GFP has been highly valuable for studies in basic research, using it to image the human brain in a clinical setting is not feasible because of the highly invasive methods that would be required to express and observe it.

Small molecules would be less invasive and more sensitive than current brain imaging methods, and could be used as synaptic targeting devices.

Small molecules, Waites suggests, offer another approach with a number of advantages over GFP. Because small molecules can cross the blood-brain barrier and could therefore be administered intravenously, “such molecules would be less invasive than current synaptic imaging methods, which are limited to rodents and invertebrates,” she argues. “They would also be more sensitive than current human brain imaging methods, and could serve as synaptic targeting devices for drugs or nanosensors.”

To identify molecules that could serve as synaptic labeling agents, Waites and Sames turned to the Columbia Genome Center’s high-throughput screening and high-content microscopy facilities. The team of researchers recently acquired a library of 8,000 fluorescent compounds synthesized by Young-Tae Chang at the National University of Singapore, the first such library to have been developed. These molecules are derived from a series of common fluorophore structural cores, but have highly diverse chemical structures and emit light at different wavelengths, enabling simultaneous imaging with other fluorescent substrates such as GFP.

To search for molecules capable of localizing to synapses with high specificity, the researchers will begin by isolating neurons from the cerebral cortex of young rats and placing them in 96-well plates. They will then infect the neurons with a lentivirus that contains a gene for a specific GFP-tagged synaptic marker, and then let the neurons grow over several weeks until synapses develop and the marker is properly localized. Once this has occurred, they will use the Columbia Genome Center’s high-throughput screening facility to screen the plates against collections of compounds, placing different fluorescent molecules from the Chang library in triplicate into different wells. The plates will then be moved to a high-throughput, high-content imaging system called the In Cell Analyzer 2000, which acquires images of each of the wells and uses powerful image analysis algorithms to assess the extent to which both the fluorescent protein and the glowing small molecules migrate to the same locations. When they do, it will indicate which of the molecules are actually labeling synapses. 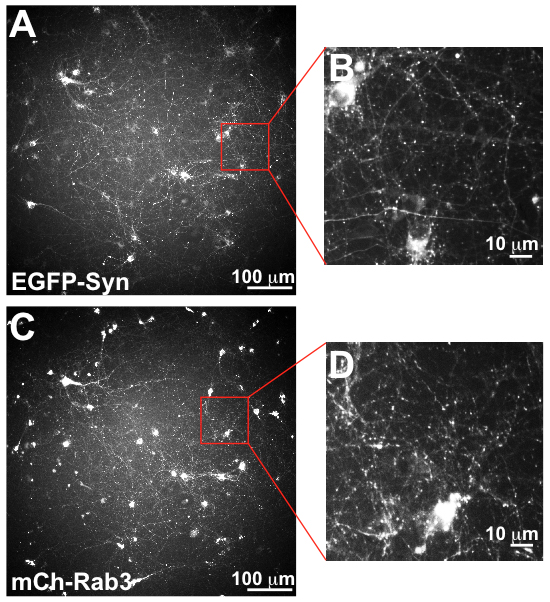 Synapses labeled with green fluorescent protein and mCherry are distinctly visible as points in the images.

In validation tests of this approach using immunostaining of fixed neurons, the researchers determined that the In Cell Analyzer has sufficient resolution to visualize neurons expressing two different fluorescent protein markers of synapses with different emissions spectra. They also performed tests that confirmed that the image analysis software can distinguish between synaptic and nonsynaptic labeling. More recently, they completed similar tests in living neurons using dyes.

These encouraging early successes have given Waites and researchers at the Genome Center the confidence to proceed with a screen of the full complement of 8,000 fluorescent compounds in the Chang library. Their hope is that this unbiased approach will not only help to identify and characterize small molecules capable of labeling synapses, but will also reveal compounds with affinities for other specific parts of neurons. “The beauty of this approach,” Waites observes, “is that we have images for everything and can evaluate what’s being labeled, so we don’t lose information.” This effort could therefore produce additional leads for reliably imaging and targeting other parts of neurons.

If the project produces validated compounds for targeting synapses, the researchers plan to test their ability to label synapses in vivo in rodents. “Even at this stage,” Waites points out, “these compounds would be really useful because they would be an easier and more accessible way of labeling synapses than GFP markers. This would already be a great endpoint.” And if this effort ultimately identifies successful compounds that could be effective in humans, Waites foresees opportunities to partner with other academic labs or pharmaceutical companies to bring the technology to the clinic.