New technologies and scientific advances have raised the tantalizing possibility that, in the future, cancer diagnosis and treatment will be carried out in a highly personalized way based on distinctive genomic features in individual patients’ tumors. This “precision medicine” paradigm has become feasible due to the increasingly detailed characterization of hallmarks of cancer such as faulty DNA repair and immunoevasion, dysregulated apoptosis, metabolism, and proliferation. Oncogene addiction, synthetic lethality, and immune checkpoint blockade have all emerged as pillars of the current precision cancer medicine paradigm and have been exploited successfully to develop remarkably effective treatments for certain cancers with highly penetrant, clonal alterations, such as chronic myeloid leukemia (CML). Similarly, immunotherapy has offered hope for patients with previously untreatable cancers such as melanoma and lung adenocarcinoma.

Unfortunately, however, researchers have faced barriers in identifying effective, durable targeted therapeutics for most cancer types. One reason is the extraordinary heterogeneity among tumors, and even among the cells in the same tumor, which gives cancer powerful mechanisms for adaptive selection and expansion of drug-resistant cells. While existing therapies generally target highly penetrant oncogenes, they are typically evaded by less common cell populations that are also capable of driving aggressive disease. In this sense, heterogeneity ultimately becomes responsible for relapse and poor prognosis. 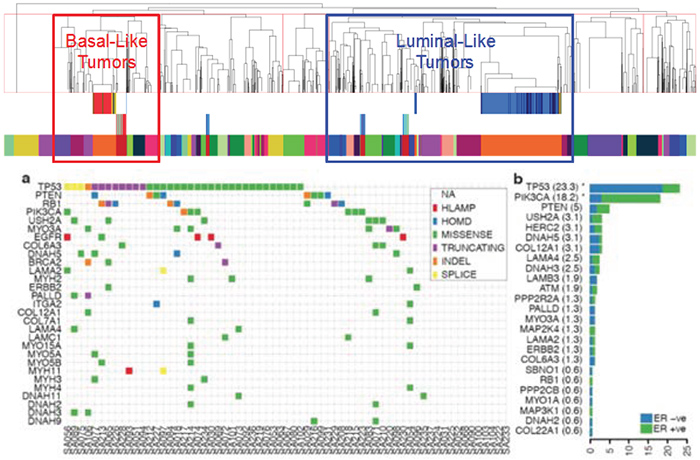 In the top graph, an unsupervised gene expression profile clustering of 7800 tumors in TCGA shows cosegregation of luminal and basal tumors. The bottom image shows the mutational landscape of triple negative breast cancer. With the exception of PIK3CA and TP53, there are no recurrent actionable mutations. Most tumors (~75%, not shown) have no recurrent events.

This issue is compounded by the fact that many untreatable cancers — such as triple negative breast cancer and castration resistant prostate cancer — present few pharmacologically actionable mutations and are mostly insensitive to immune checkpoint blockade. Furthermore, tumor cells can become drug-resistant via several distinct mechanisms, including subclonal selection or adaptive reprogramming to a drug-resistant state, independent of tumor genetics.

As a result, despite early enthusiasm for targeted therapy, most patients undergoing treatment based on actionable oncogene alterations relapse with drug-resistant disease or achieve only a short disease-free survival benefit, often without any increase in overall survival. Similarly, while some tumors respond positively to immune checkpoint inhibitors such as ipilimumab and pembrolizumab, most remain untreatable using the recent wave of immunotherapeutics. These factors suggest the need for new, complementary approaches.

The Columbia University Center for Cancer Systems Therapeutics was established to address the challenges currently facing precision medicine, by developing a new conceptual framework capable of accounting for the extreme heterogeneity seen in cancer. Instead of focusing on the initiating events that turn a cell cancerous, our approach focuses on the regulatory machinery responsible for what we call tumor homeostasis and tumor canalization . Just as regulatory networks have been shown to enable cells to differentiate and maintain stable phenotypes, we propose that the same regulatory principles and mechanisms can be used to understand how cancer cells survive and propagate in the face of endogenous and exogenous perturbations.

Using state-of-the-art systems biology methods and perspectives developed over the past 10 years in the laboratories of its investigators (see publications ), CaST is researching the factors that enable tumor homeostasis by using regulatory networks as an integrative, analytical framework. Several of the investigators in the CaST center have previously collaborated to show that cancer cell state is controlled by a handful of proteins and other gene products (master regulators) that work in concert within tightly auto-regulated modules (tumor checkpoints) to maintain cancer-related phenotypes in a homeostatic state. Similar to a traffic checkpoint, the aberrant signals that contribute to implementing and maintaining tumor cell state must converge on these modules, where they are first integrated and translated into downstream transcriptional programs that generate the tumor signature. 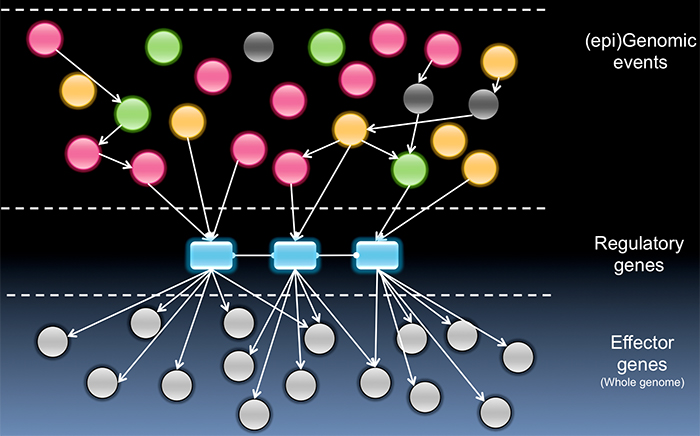 In multiple studies, we have shown that genetic or pharmacological inhibition of individual or synergistic master regulator proteins within these modules induces tumor checkpoint collapse, abrogating tumor cell viability or leading to terminal differentiation. Interestingly, we have also shown that tumor checkpoint activity is almost always maintained by feedback loops, a hallmark of homeostatic control. Taken together, these findings strongly support the hypothesis that tumor-related phenotypes — such as tumor initiation, progression, drug sensitivity, and drug resistance — arise and are maintained by aberrant homeostatic control.

Surprisingly, MR proteins comprising a tumor checkpoint are rarely mutated and are almost never in the top 500 most differentially expressed genes. This suggests they may play a critical role in maintaining, rather than initiating, tumor cell state and may be regulated by aberrant signals from genetic alterations in their upstream pathways. Considering the large landscape of possible cancer-initiating mutations, we believe that focusing on master regulators and tumor checkpoints that initiate the hallmarks of cancer could dramatically simplify the problem of controlling cancer. Moreover, tumor checkpoints are highly conserved across many tumors, raising the possibility that identifying therapies capable of disabling these checkpoints could potentially have wide application in the context of precision medicine.

The existence of this recurrent regulatory architecture suggests that targeting its mechanisms and dependencies could offer novel, generalizable insights that could improve cancer therapy. The overarching mission of CaST is to investigate the dysregulated, time-dependent mechanisms that preside over tumor homeostasis and canalization, considering the effects of inter- and intratumor heterogeneity, endogenous (i.e., genomic-based) perturbations, and exogenous (i.e., microenvironment and small-molecule-based) signals.

The overarching mission of CaST is to investigate the dysregulated, time-dependent mechanisms that preside over tumor homeostasis and canalization.

In our first project, we are attempting to move beyond current approaches for elucidating tumor checkpoints and master regulators, which are largely static and not designed to predict how tumors respond to pharmacological and genomic perturbations over time. Thus, we are developing novel methodologies to mechanistically uncover the regulatory machinery that maintains cancer cell state and governs cell state transition. We are also working to define the role of regulatory networks in implementing distinct tumor phenotypes, from metastatic progression, to immunoevasion, to drug resistance. This effort will leverage and integrate time-course data from gene expression and computationally inferred protein activity profiles, generated by small molecules and RNAi/CRISPR perturbations.    Learn more about project 1

In our second project, we are investigating cell state plasticity and tumor/microenvironment heterogeneity, which represent formidable obstacles to successful treatment of human malignancies. This interest is driven by a growing awareness that tumors can harbor distinct niches that include genetically distinct subclones (which have identical or distinct tumor checkpoints), as well as isogenic niches (which present with orthogonal checkpoints). Our goal is to compile a comprehensive inventory of tumor dependencies among such heterogeneous niches that can be targeted pharmacologically, We are studying these mechanisms by developing new methods to identify distinct tumor compartments and heterogeneity at the single-cell level.   Learn more about project 2

Finally, we are developing and validating computational methods for the prioritization of MR-targeting drugs and drug combinations to either implement or prevent specific tumor state transitions. This includes inducing irreversible commitment to cell death, preventing progression to a malignant tumor stage, and rescuing drug sensitivity. In addition, are attempting to address a broad range of questions related to the heterogeneity of tumor response, including mechanisms that allow tumor cells to compensate for MR-targeted therapy. We propose that addressing tumor plasticity and potential escape routes implemented by tumor state reprograming is going to be critically relevant for the chronic management of cancer patients.  Learn more about project 3