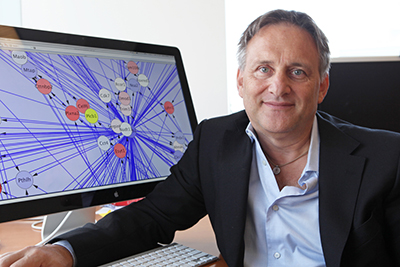 Andrea Califano, the Clyde and Helen Wu Professor of Chemical Systems Biology and Chair of the Columbia University Department of Systems Biology, has been named a recipient of a National Cancer Institute Outstanding Investigator Award. The seven-year grant will support the development of systematic approaches for identifying the molecular factors that lead to cancer progression and to the emergence of drug resistance at the single-cell level.

Driving Dr. Califano’s project is the challenge that doctors and scientists currently face when trying to predict the potential success of available cancer therapies in specific patients. Although targeted therapeutics can be highly effective in some patients, others presenting with virtually identical genetic profiles often fail to benefit. Moreover, even in patients who initially respond to targeted agents, the relief can be fleeting as the tumor eventually loses its susceptibility to treatment.

One explanation of why this happens is that individual cancer cells are incredibly diverse at the molecular level, both across different patients and within the same tumor. Researchers believe such heterogeneity can lead to drug resistance and cancer relapse either because there will always be a few cancer cells with mutations that enable them to avoid the effects of targeted therapies, or because the nature of cancer as a complex, dynamic system allows them to adapt to treatment, even without genetic alterations.

With the support of the Outstanding Investigator Award, Dr. Califano will test the hypothesis that dissecting the regulatory mechanisms that lead to the heterogeneity of individual tumors at the single-cell level could reveal more effective ways of preventing, diagnosing, and treating cancer. Rather than attempting to identify the individual genetic events that contribute to tumorigenesis, he will concentrate on the regulatory mechanisms that allow cancer cells to maintain their tumorigenic state, a process called cancer homeostasis.

In prior work, the Califano Lab has developed methods that combine computational and experimental approaches to model cancer cell regulatory networks. These models make it possible to systematically and efficiently identify the regulatory modules (tumor checkpoints) that are responsible for maintaining cells in a cancerous state as well as the individual proteins (master regulators) that comprise these modules. Because these modules’ activity is essential for the survival of tumor cells, they constitute a distinct type of Achilles heel of cancer.

Califano has repeatedly shown that the tumor checkpoint hypothesis offers a complementary strategy to genomics-based approaches targeting genetic mutations (oncogenes). His approach also offers certain advantages, considering that cells can become cancerous in a multitude of ways and that tumor checkpoints and master regulators appear to be far more conserved across tumors than the specific genetic mutations they integrate.

In earlier research Califano has used this approach to identify regulatory mechanisms that are necessary to maintain tumor cell state but not the state of related normal, noncancerous cells. Doing so, he has argued, can make it possible to identify drugs capable of modulating these tumor-specific mechanisms without affecting healthy cells. In several cases, his approach has already identified drugs capable of targeting these vulnerabilities, leading to clinical trials to investigate their applicability to human cancer.

Under this new grant, he plans to increase the resolution of the approach, taking it to the single-cell level by developing methods for defining the subclonal composition of single tumors. Such an approach, he suspects, can reveal the coexistence of distinct states of the same cancer cell in individual tumors. Previous research focusing on gliomas that Califano conducted in collaboration with Antonio Iavarone and Anna Lasorella, for example, showed that the mesenchymal and proneural cell states are regulated by alternative tumor homeostasis mechanisms. More recent data shows that cells can switch dynamically between these two states, within the same tumor. Gaining the ability to identify such dynamic states more generally would provide valuable information that could be used to identify combination therapies that would hit the independent vulnerabilities of these tumors.

Looking at tumor cell heterogeneity from the perspective of this tumor checkpoint hypothesis, Califano suggests, could dramatically simplify the problem of how to cut off the escape routes that allow tumors to become resistant to treatment. “When you think about intra-tumor heterogeneity,” he argues, “studying each individual resistance-inducing mutation would be close to impossible. However, if we can confirm our previous findings that entire mutational repertoires are integrated by the same tumor checkpoint modules, this will dramatically simplify the problem. It will collapse an untractable level of tumor genetic heterogeneity into a small set of distinct, targetable functional dependencies that account for the entire tumor cell population. We are grateful to the NCI for giving us the opportunity to further develop what we believe may be a very promising approach.”

The Outstanding Investigator Award (OIA) provides support to established researchers with a history of high productivity and accomplishment. By providing stable funding over several years, it is designed to give investigators the opportunity to take risks, pursue new lines of research, and refine techniques they have been developing. Ultimately, the OIA provides the stability necessary for scientists to focus on research that has the greatest potential for improving cancer care.