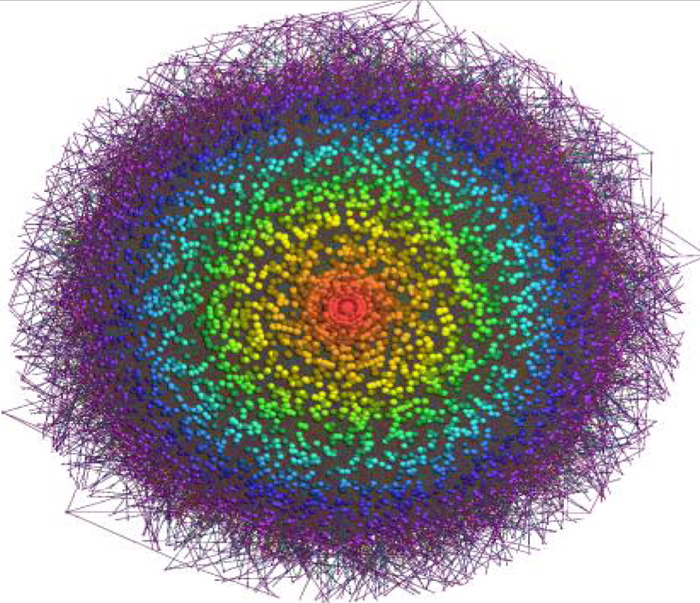 For decades, scientists have thought that the primary role of messenger RNA (mRNA) is to shuttle information from the DNA to the ribosomes, the sites of protein synthesis. However, new studies now suggest that the mRNA of one gene can control, and be controlled by, the mRNA of other genes via a large pool of microRNA molecules, with dozens to hundreds of genes working together in complex self-regulating sub-networks.

In work published in the journal Cell, Andrea Califano, José Silva, and colleagues analyzed gene expression data in glioblastoma in combination with matched microRNA profiles to uncover a posttranscriptional regulation layer of surprising magnitude, comprising more than 248,000 microRNA (miR)-mediated interactions. These include ∼7,000 genes whose transcripts act as miR “sponges.” When two genes share a set of microRNA regulators, changes in expression of one gene affects the other. If, for instance, one of those genes is highly expressed, the increase in its mRNA molecules will “sponge up” more of the available microRNAs. As a result, fewer microRNA molecules will be available to bind and repress the other gene’s mRNAs, leading to a corresponding increase in expression.

Although such an effect had been previously elucidated, the range and relevance of this kind of interaction had not been characterized.

Barry Honig, Professor of Biochemistry & Molecular Biophysics, Howard Hughes Medical Institute investigator, and Director of the Center for Computational Biology and Bioinformatics, was honored by The American Society for Biochemistry and Molecular Biology with the DeLano Award for Computational Biosciences for his work in macromolecular interactions in biology. The award is given to a scientist for innovative and accessible development or application of computer technology to enhance research in the life sciences at the molecular level. Dr. Honig's software tools and their underlying conceptual basis are widely used by the general biological research community to analyze the role of electrostatics in macromolecular interactions.

The 6th Annual DREAM competition, the 7th Annual RECOMB Satellite Conference on Systems Biology, the 8th Annual RECOMB Satellite Conference on Regulatory Genomics, and the IDIBELL Conference on Cancer Informatics will be held jointly at the IDIBELL institute, in Barcelona, Spain, on October 14-19, 2011. The four conferences aim to bring together computational and experimental scientists in the area of regulatory genomics and systems biology, to discuss current research directions, latest findings, and establish new collaborations towards a systems-level understanding of gene regulation, with particular emphasis on cancer. Click here for more information.

Saeed Tavazoie, Professor at the Department of Biochemistry and Molecular Biophysics at Columbia University, has joined C2B2. Dr. Tavazoie's research focuses on understanding the organizing principles that underlie the evolution and function of molecular networks. At one scale, his work uses large-scale genome-wide observations to reveal the nuts and bolts of these networks and to understand how they come together to orchestrate biological behavior. At the other extreme, it aims to achieve a holistic understanding of function by considering the native ecological context in which these networks have evolved. At the highest level, his goal is to understand how molecular networks embody an internal representation of the outside world and facilitate adaptive behaviors.

Dr. Tavazoie's research focuses on these problems in the context of transcriptional regulatory and genetic networks of organisms ranging from bacteria to human. In addition to using traditional experimental methods, his lab develops and employs novel technologies for making genome-wide observations, together with computational and analytic tools required to turn these observations into predictive models of the underlying biology.

Professor Tavazoie received his PhD from Harvard Medical School in 2000. He joins C2B2 and Columbia University from Princeton where he was Professor in the Department of Molecular Biology and the Lewis-Sigler Institute for Integrative Genomics.

Yufeng Shen, Assistant Professor at the Department of Biomedical Informatics, has joined C2B2 and the Columbia Initiative in Systems Biology. Dr. Shen's research focuses on the development and application of computational methods for the study of human genetics and disease. Specifically, his group is working in four areas, including high-throughput sequencing and de novo assembly, genetic mapping of human diseases, autoimmunity and major histocompatibility complex, pharmacogenomics and personalized treatment.

Dr. Shen received his PhD in computational biology from the Human Genome Sequencing Center at Baylor College of Medicine in 2007. In 2008 he joined Columbia University as a postdoctoral fellow.

Sagi Shapira, Assistant Professor of Systems Biology in the Department of Microbiology and Immunology, has joined the Columbia Initiative in Systems Biology (CISB). Dr. Shapira's research focuses on deciphering the genetic and molecular circuitry that is at the interface of host-pathogen interactions. The goal is to understand how this circuitry controls cellular responses to infection, imparts selective pressure on viruses and affects disease progression. A mechanistic understanding of these relationships will provide important insights into cellular machinery that control basic cell biology and will have broad implications in human translational immunology and infectious disease research.

Shapira received his PhD in immuno-parasitology under the guidance of Christopher A. Hunter at the University of Pennsylvania in 2005 and a Masters in Public Health at Yale University in 1999. He joins Columbia from the Broad Institute where he has a postdoctoral fellow.

New Clues to the Genetics Roots of Autism

Identification of complex molecular networks underlying common human phenotypes is a major challenge of modern genetics. A new network-based method developed at the lab of Dennis Vitkup was used to identify a large biological network of genes affected by rare de novo copy number variations (CNVs) in autism. The genes forming the network are primarily related to synapse development, axon targeting, and neuron motility. The identified network is strongly related to genes previously implicated in autism and intellectual disability phenotypes.

These findings are consistent with the hypothesis that significantly stronger functional perturbations are required to trigger the autistic phenotype in females compared to males. Overall, the analysis of de novo variants supports the hypothesis that perturbed synaptogenesis is at the heart of autism.

Computational and Functional Dissection of Drug Targets in Melanoma

Systematic characterization of cancer genomes has revealed a staggering number of diverse alterations that differ among individuals, so that their functional importance and physiological impact remains poorly defined. In order to identify which genetic alterations are functional, the lab of Dr. Dana Pe’er has developed a novel Bayesian probabilistic algorithm, CONEXIC, to integrate copy number and gene expression data in order to identify tumor-specific “driver” aberrations, as well as the cellular processes they affect.

In work published in the journal Cell, the new method was applied on data from melanoma patients, identifying a list of 64 putative ‘drivers’ and the core processes affected by them. This list includes many known driver genes (e.g., MITF), which CONEXIC correctly identified and paired with their known targets. This list also includes novel ‘driver’ candidates including Rab27a and TBC1D16, both involved in protein trafficking. ShRNA-mediated silencing of these genes in short-term tumor-derived cultures determined that they are tumor dependencies and validated their computationally predicted role in melanoma (including target identification), suggesting that protein trafficking may play an important role in this malignancy.