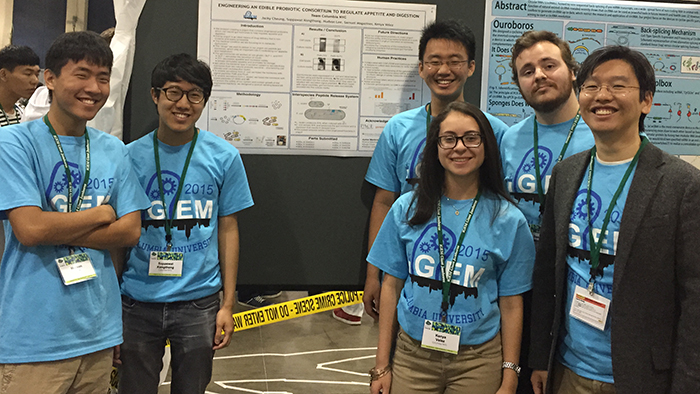 A team of undergraduate students based at Columbia University for the first time participated in this year’s International Genetically Engineered Machine Foundation (iGEM) competition. Supervised by Department of Systems Biology Assistant Professor Harris Wang, the team spent this past summer developing a project that used synthetic biology methods to engineer an edible, probiotic consortium of bacteria that could regulate hunger and digestion. In September they presented their results at the iGEM Giant Jamboree in Boston, MA, where they received a silver medal for their efforts. (For more informtion about their project, see the Columbia iGEM Team website.)

“I think it’s fantastic that this ambitious group of undergraduates worked so hard to represent Columbia University on this international stage,” says Dr. Wang. “Columbia has one of the great undergraduate colleges, and now that we have a critical mass of interested students and faculty laboratories with expertise in synthetic biology, we think iGEM offers a valuable opportunity to compete with and learn from teams at other leading institutions.”

iGEM gives undergrads the chance to define and execute a research project they develop on their own.

For the participating students, the experience offered a chance to define and execute a research project that they developed on their own. As Jacky Cheung, a Columbia College student who was a member the team, puts it, “Usually when undergraduates go into a lab, they are helping someone else with their research. They don’t get the chance to work on something that comes from their own interests. Participating in iGEM is great for students who have these kinds of interests and who want to know what it’s really like to do research. We also discovered that iGEM offers a unique opportunity for students from lots of different backgrounds to become involved in synthetic biology.”

With the success of this pilot project and a growing interest in synthetic biology at both Columbia College and Columbia University Medical Center, plans are currently underway to expand Columbia’s participation in the iGEM competition in future years.

Putting together the pieces

Started in 2004, the iGEM competition is an annual event that invites teams of undergraduate students from around the world to build genetically engineered systems using standard biological parts called BioBricks. Conceived as modular components, BioBricks can be combined in different ways to design biological systems in cells that can perform desired functions. By approaching genetic engineering in this way, iGEM aims to make synthetic biology more systematic and cooperative, enabling rapid innovation by saving biologists from the need to reproduce experiments that others have already done.

Teams can compete in different categories and earn a variety of awards based on the amount of work they are able to complete. Among the challenges the Columbia team faced were to contribute unique parts to the Registry of Standard Biological Parts, experimentally validate the function of the BioBricks they designed, develop a presentation and poster explaining their work, and consider the human relevance and ethical contexts for the new parts.

Columbia’s team required that students apply to join, and by June it included four members from Columbia College: Jacky Cheung, Suppawat Kongthong, Hudson Lee, and Samuel Magaziner. Kenya Velez, an undergraduate at Pace University in Manhattan, also joined the team as part of the SPURS Biomedical Research Program. (This summer program offers undergraduates from backgrounds that are underrepresented in the sciences opportunities to pursue research at Columbia University.) Mentoring the team were postdoctoral research scientist Sonja Billerbeck of Virginia Cornish’s lab, as well as Nathan Johns and Sway Chen, two graduate students in the Wang Lab. 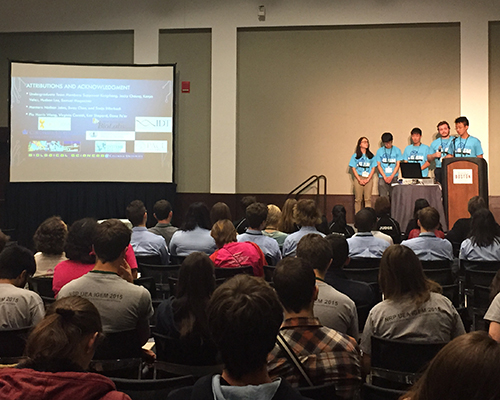 The Columbia team presented its results at the iGEM Giant Jamboree in Boston in September 2015.

The project grew from a fusion of the team members’ interests. Some were interested in working on a problem related to diabetes and human disease. Others had the idea of developing a communication system among genetically distinct groups of bacteria that would enable them to do something that a single population of cells can’t. There was also interest in creating a general secretion system that would help people to recognize and manage problems in their own health.

Over the course of the summer, students met weekly in the Wang Lab, first defining the scope of their project and then learning to design and build genetic circuits. In this way, the experience provided opportunities both to learn basic principles of synthetic biology and to gain experience working as members of an interdisciplinary research team.

By the time the project was complete the students had manufactured an E. coli bacterium capable of secreting peptides that can modulate hunger and insulin levels. Ultimately, such a bacterium might be included in yoghurt to help the person consuming it eat less and still feel satisfied. This kind of system, the team hypothesized, could also potentially be used to manage hormone-related diseases such as diabetes, depression, or dietary problems.

In addition to this research component, an important part of the iGEM competition is to encourage participants to think about the ethical questions that genetic engineering raises and perform outreach that promotes dialogue and understanding between scientists and the general public. The Columbia team interviewed several nonscientists and posted a survey on social media to solicit opinions on their project and on the field of synthetic biology in general. These results were also included in their final presentation.

With the excitement that this year’s pilot project generated, plans are developing to expand it. The students are beginning to organize a club at Columbia that would make participation in the iGEM competition an annual event and host relevant speakers over the course of the year. A more formal organization that involves both faculty and students will also enable it to begin attracting additional industry sponsorship; this will make it possible to involve more students and undertake more ambitious projects.

All agreed that this year’s effort was a learning experience that will help the team compete better in coming years. One thing Cheung realized in particular is that a successful iGEM project needs more than biologists; it needs team members who can contribute different kinds of expertise. “Throughout the project,” he says, “we realized that it would be good to have someone who was good in coding and computational modeling. We also really would have liked to have had people who were artistically inclined, or who could develop an educational curriculum, or who had studied ethics, or who were good in public communication of science. These are some areas we’ll be looking for help with in the future. For me it was really interesting to realize that making a discovery in science isn’t enough; you need people in many different disciplines to be effective.”

Mobilizing the combined resources of Columbia College and Columbia University Medical Center holds great potential to bring these different kinds of expertise together. As Wang explains, “We were very excited that we were able to leverage the interdisciplinary nature of the Department of Systems Biology to build bridges between Columbia’s two main campuses. It really was an all-around effort, with the Department of Systems Biology, Columbia College, and Columbia Engineering all providing support for the students and the costs of the required materials. And although Columbia University Medical Center doesn’t itself run an undergraduate program, it shows the ways in which it can contribute to undergraduate education elsewhere around the university.”

In the coming months, the Columbia synthetic biology team looks forward to using the lessons it learned to prepare for the 2016 iGEM challenge.