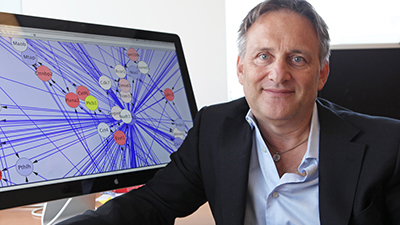 The Chan Zuckerberg Initiative (CZI) has awarded Andrea Califano, Dr, a new grant in support of his work to develop a comprehensive library of regulatory interactions within molecularly defined cellular populations and molecular determinants (master regulators) of individual cells’ state. This will arm scientists with a unique resource to study biology at the individual cell level and to gain further insight into the fundamental understanding of molecularly distinct cell types.

With the support of CZI, founded by Facebook CEO Mark Zuckerberg and his wife, Priscilla Chan, Dr. Califano, chair of Columbia’s Department of Systems Biology, and his group will apply their computational methods that accurately and systematically measure and analyze regulatory interaction at the single cell level to elucidate distinct cellular states and to establish both cell-state markers, as well as the proteins that are causally responsible for implementing that state.

A critical advantage offered by the approaches that the Califano Lab brings to the CZI community is that of addressing one of the most critical issues in single cell biology characterization. Specifically, since the depth of transcriptional sequencing of single cells is generally a very small fraction of what can be achieved from bulk tissue, most of the genes are actually lost and only the 20% to 30% of the genes that are most highly expressed can be detected. This has been dubbed the gene dropout problem. By using the recently published metaVIPER algorithm, this problem is eliminated as regulatory networks are used to accurately infer the activity of 6,000 proteins that include all the critical players in cell state implementation and modulation, even if their RNA cannot be detected, thus fully addressing gene dropout and allowing much deeper investigation of single cell biology.

Based on these advances, Dr. Califano’s work will contribute to the Human Cell Atlas project, a global undertaking that aims to define every cell type of the human body, with the idea of creating a collection of maps for the cellular basis of health and disease. CZI has made the Human Cell Atlas a philanthropic priority, with this latest round of funding targeting researchers’ development of computational tools, algorithms, visualizations and benchmark datasets to advance that endeavor.

"We hope our work will have an immediate impact on the Human Cell Atlas efforts, by providing a deeper understanding of how different cell types work together and of what proteins are responsible for maintaining their state."

Dr. Califano’s sophisticated computational framework greatly improves the ability to identify molecularly distinct cell states and the activity of the proteins that determine them. In the CZI project, his team will first use ARACNe, an algorithm they developed which has been broadly adapted and validated in the research community, to reconstruct the regulatory networks that determine cell behavior from the RNASeq profiles of single cells representing each molecularly distinct cluster identified by their analysis with at least 100 cells. These interactomes will then be used to infer protein activity and master regulators of all identified single cell states. The researchers intend to analyze profiles of 64,000 cells isolated from four tissue types—lung, bone marrow, brain and kidney.

“We hope our work, which leverages critical systems biology principles that have been instrumental in elucidating driver genes in cancer, will have an immediate impact on the Human Cell Atlas efforts, by providing a deeper understanding of how different cell types work together and of what proteins are responsible for maintaining their state,” says Dr. Califano, who also is the Clyde and Helen Wu Professor of Chemical Systems Biology at Columbia University Irving Medical Center (CUIMC) and director of the JP Sulzberger Columbia Genome Center.

Dr. Califano’s project is one of 85 research projects to receive grant funding from CZI Donor Advised Fund at the Silicon Valley Community Foundation from a pool of nearly 300 proposals. Selected scientists and researchers hail from 53 different organizations and institutions, representing nine countries and four continents. Participants will work with CZI’s science and engineering teams to help enhance and package their tools, and where appropriate, link them to the Human Cell Atlas Data Coordination Platform . CZI is providing $15 million in funding over one year, in total, for the projects. Last October, fellow Columbia Professors Peter Sims, Raul Rabadan and Tom Maniatis also received CZI grants for research tied to the Human Cell Atlas.

Dr. Califano, one of the founders of the systems biology field, currently chairs the Department of Systems Biology at CUIMC. Work in the Califano Lab includes a combination of computational and experimental methodologies to reconstruct the regulatory logic of human cells in genome-wide fashion. His group has shown that analysis of this logic can identify master regulator proteins responsible for human disease, including cancer and neurodegenerative syndromes, as well as for normal tissue development. In addition, his lab has developed methods for discovering drug compounds and drug combinations that can inactivate these proteins, thus providing valuable therapeutic strategies. These findings have been translated into several clinical studies, including an innovative N-of-1 study at Columbia in which cancer master regulators are identified and pharmacologically targeted on an individual patient basis, using a systems biology approach to precision medicine.