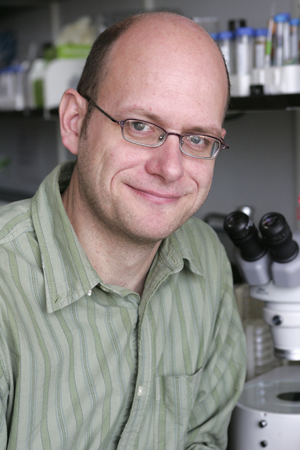 Oliver Hobert, an interdisciplinary faculty member of the Department of Systems Biology, has received a Javits Neuroscience Investigator Award from the National Institute of Neurological Disorders and Stroke (NINDS). This prestigious grant provides long-term support for investigators who have demonstrated exceptional achievement throughout their careers. The award will enable the Hobert Lab to pursue a new project investigating sex-based differences in the regulation of neuronal identity.

Also a Professor of Biochemistry and Molecular Biophysics and an Investigator of the Howard Hughes Medical Institute, Dr. Hobert is known for his research using C. elegans to understand the molecular programs that control cell-type differentiation within the nervous system. C. elegans has become an invaluable model organism for studying the nervous system because it contains just over 300 neurons whose development has been studied in great detail.

Recently, electron microscopy was used to compare nervous systems in male and hermaphrodite worms, and showed that some of these neurons are present in both sexes. Interestingly, the researchers discovered that even when these neurons had the same lineage history, position, morphology, and molecular features, there was a striking divergence in the patterns of synapse formation between the sexes. Under the new grant, the Hobert Lab will attempt to identify the mechanisms that control this divergence. The project should produce not only a much deeper understanding of sex-based differences in neuronal identity, but also new resources that will support future investigation of this phenomenon.

Winners of the Javits Neuroscience Investigator Awards are nominated by NINDS staff members and members of the National Advisory Neurological Disorders and Stoke Council (NANDS). The grant acknowledges grant recipients as being leaders in neuroscience who have been highly productive or have contributed paradigm-shifting ideas. By supporting investigators for 4-7 years, the grant also anticipates high productivity in the years to come.