Targeting the Engine Room of the Cancer Cell 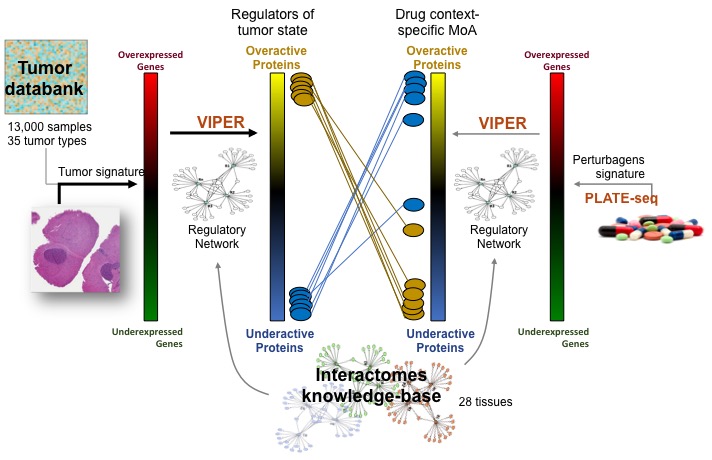 Schematic diagram for the OncoTreat clinical pipeline. The pipeline consists of a series of pre-computed components, including a reference set of more than 13,000 tumor expression profiles representing 35 different tumor types, a collection of 28 tissue context-specific interactomes and a database of context-specific mechanism of action (MoA) for >400 FDA-approved drugs and investigational compounds in oncology. The transcriptome of the perturbed cell lines is profiled at low cost by PLATE-Seq. The process begins with the expression profile of a single patient sample, which is compared against the tumor databank to generate a tumor gene expression signature. This signature is interpreted by VIPER using a context-matched interactome to identify the set of most dysregulated proteins, which constitute the regulators of the tumor cell state – tumor checkpoint. These proteins are then aligned against the drugs’ and compounds’ MoA database, to prioritize compounds able to invert the activity pattern of the tumor checkpoint. (Image courtesy of Califano Lab)

Researchers at Columbia University Irving Medical Center (CUIMC) have developed a highly innovative computational framework that can support personalized cancer treatment by matching individual tumors with the drugs or drug combinations that are most likely to kill them.

The study, online today in Nature Genetics , by Dr. Andrea Califano of Columbia University Irving Medical Center and Dr. Irvin Modlin of Yale University and Wren Laboratories LLC, co-senior author on the study, with collaborators from 17 research centers worldwide, details a proof of concept for a novel analytical platform applicable to any cancer type and validates its predictions on gastroenteropancreatic neuroendocrine tumors (GEP-NETs). The latter represent a rare class of tumors of the digestive system that, when metastatic, are associated with poor survival.

In a comprehensive analysis of samples from 212 patients, the team first identified a new class of drug-targets, called master regulators, which are rarely if ever mutated in cancer patients, and then predicted the drugs that can specifically invert their activity. Surprisingly, even though tumors were analyzed on an individual patient basis, the algorithm predicted the same top drug – Entinostat – for almost half of the metastatic patients. More importantly, when tested in a xenograft transplant of the tumor in a mouse, this drug induced dramatic shrinking of the tumor, while drugs predicted to have partial or no effect were also validated to produce results in line with predictions. These data led to rapid IND (Investigational New Drug) approval by the FDA for a metastatic GEP-NET clinical trial that is open and recruiting patients at Columbia University.

The innovative approach proposed in this manuscript, OncoTreat, is now available as a New York State Department of Health approved test through the Department of Pathology and Cell Biology at CUIMC. The test was co-developed with DarwinHealth, a precision oncology company born out of the Califano Lab work. It is the only such test designed to predict drugs that are optimally matched to individual patient tumors for 10 different aggressive tumor subtypes of ovarian, breast, pancreas, prostate, bladder, and lung cancer, as well as meningioma, sarcoma, glioblastoma, and GEP-NETs.

“This manuscript represents a first proof of concept of what may become a valuable new tool to deliver an effective and systematic precision medicine approach to cancer patients that may complement what we are currently doing with genetic mutations,” says Dr. Califano, the Clyde and Helen Wu Professor of Chemical and Systems Biology and chair of the Department of Systems Biology at CUIMC.

“Using novel systems biology methodologies, which combine the use of supercomputers with large-scale pharmacological assays, we can computationally predict and prioritize drugs and drug combinations that will most effectively kill cancer cells,” explains Dr. Califano. “Such an approach is especially promising for patients with aggressive tumors, who lack actionable mutations, fail to respond to targeted inhibitors or immune-checkpoint inhibitors, or relapse following initial response to a standard of care drug or drug combination. These patients, who unfortunately represent the majority of the aggressive tumor cases, present few, if any, effective therapeutic options. We hope that OncoTreat may offer the oncologist new alternatives when they run out of approved therapies, alternatives that are predicated on an increasingly mechanistic understanding of cancer cell regulation and response to drugs rather than on educated guesswork.”

Dr. Modlin, who had initially proposed the concept of addressing Neuroendocrine tumors using the innovative strategy developed by Dr. Califano, commented that the successful demonstration of the efficacy of a pre-treatment molecular identification strategy was a significant advance on previous practice where treatment agents were used based upon serendipitous selection rather than objective molecular evidence. This work combined with the use of molecular signature tools in blood to monitor real-time efficacy of therapy on disease are likely to change the face of therapeutic management in many diseases.

The OncoTreat framework centers on identifying and analyzing actionable proteins in cancer patients, independent of their genetic mutations. Called master regulators (MR), these proteins are organized into small regulatory modules – so-called tumor checkpoints – which are responsible for regulating and ensuring the stability of tumor cells. Master regulators and tumor checkpoints can be efficiently and systematically elucidated using the VIPER algorithm developed by the Califano Lab and published in an earlier Nature Genetics manuscript; critically, these analyses allow tracking their activity through metastatic progression, relapse, and development of drug resistance. These computational models were built based on mathematical concepts from information theory and Bayesian statistics and have been extensively validated over the past decade.

MR proteins represent a novel class of tumor vulnerabilities and potential therapeutic targets that are being increasingly adopted by pharmaceutical companies. Extensive research has demonstrated that shutting down the activity of these proteins is catastrophic for tumor cells, making it virtually impossible for them to survive and grow in their environment. In this study, drug compounds are prioritized based on their ability to revert the coordinated activity of 50 such master regulator proteins, as identified by the analysis of tumor samples. Predicted activity reversal was surveyed from an analysis of drug assays both in cell lines and in vivo, in PDX (Patient-Derived Xenografts) mice models.

“Master regulators—a new Achilles’ heel of cancer—represent the engine room of the cancer cell, where the effects of all tumorigenic mutations come together. What OncoTreat is able to do is attack this convergence point with a therapeutic intervention,” says collaborator Gary Schwartz, MD, division chief of hematology and oncology at CUIMC and associate director of the Herbert Irving Comprehensive Cancer Center. “By collapsing this tumor bottleneck, blocking this Achilles’ heel, the cancer can no longer survive. This method is so innovative, requiring a lot of mathematical modeling and understanding. It’s a whole new approach to cancer therapeutics, taking us in an entirely new direction.”

Califano and team validated the OncoTreat approach on a cohort of 212 gastroenteropancreatic neuroendocrine tumors, a deliberate choice since GEP-NETs are rare and poorly characterized, making them one of the more challenging tumors to research. Their analysis identified several MR proteins, including key immune function modulators, whose role as critical tumor dependencies was experimentally confirmed. The GEP-NET cells were screened against a library of 107 compounds, and found that the drug, Entinostat, proved to successfully invert the activity of the top 50 MR proteins in 42 percent of GEP-NET patients, providing the rationale for the follow up clinical trial.

“It is certainly our hope that this may provide a short cut to identify viable candidates for phase 2 trials in this and other malignancies,” says coauthor Edward Gelmann, MD, professor of medicine and of pathology and cell biology at CUIMC.

In addition to its potential therapeutic value, OncoTreat provides novel insight into the mechanisms and maintenance of GEP-NETs. In future work, Califano and collaborators intend to expand this approach to cover more than 80% of human malignancies and to develop clinical trials that will test the predictions in patients.

The Nature Genetics paper is titled “A Precision Oncology Approach to the Pharmacological Targeting of Mechanistic Dependencies in Neuroendocrine Tumors”. The Califano Lab and Dr. Modlin worked with multiple collaborators, as well as with Columbia’s Department of Pathology and Cell Biology, Columbia’s Department of Urology, the Broad Institute of Harvard and MIT, and 17 additional institutions.

The study was funded by the Falconwood Foundation.