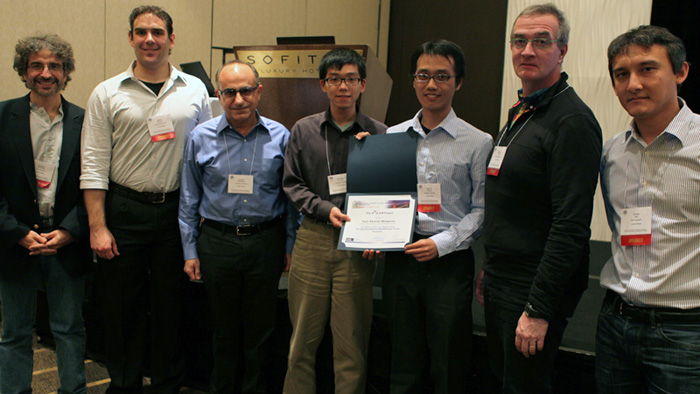 The team of Professor Dimitris Anastassiou and graduate students Wei-Yi Cheng and Tai-Hsien Ou Yang has been recognized as the best performer in the Sage Bionetworks – DREAM Breast Cancer Prognosis Challenge. This challenge, one of four organized as part of the seventh Dialogue for Reverse Engineering Assessments and Methods (DREAM7), was designed to assess the ability of participants’ computational models to predict breast cancer survival using patient clinical information and molecular profiling data. As a reward for this accomplishment, the journal Science Translational Medicine has just published a paper from the Anastassiou lab describing their model. It is also the journal’s cover theme for this issue, which includes a second article describing the Challenge.

The Columbia University researchers based their DREAM entry on previous work to identify what they call “attractor metagenes,” sets of strongly co-expressed genes that they have found to be present with very little variation in many cancer types. Moreover, these metagenes appear to be associated with specific attributes of cancer including chromosomal instability, epithelial-mesenchymal transition, and a lymphocyte-specific immune response. As Wei-Yi Cheng comments in Sage Synapse, “We like to think of these three main attractor metagenes as representing three key ‘bioinformatic hallmarks of cancer,’ reflecting the ability of cancer cells to divide uncontrollably and invade surrounding tissues, and the ability of the organism to recruit a particular type of immune response to fight the disease.”

If these universal signatures of cancer are prognostic in breast cancer, then why not in other types of cancer?

In the first stage of the DREAM challenge, participants were asked to train their algorithms on METABRIC, a collection of genomic and clinical data generated from 2,000 breast cancer samples. The Anastassiou team found that searching for attractor metagenes in the data enabled them to make strong prognoses under certain conditions. They then developed a computational model that combined these gene signatures. In the final stage of the Challenge, the accuracy of each of the participants’ models was tested against data from a new set of 184 breast cancer patients, generated for the Challenge with the support of a donation by the Avon Foundation. The Columbia team was the best performer in all stages of the Challenge, including the final validation exercise, where they correctly predicted which of two patients would survive longer in 76% of cases, an exceptionally high performance. Approximately 350 participants from 35 countries registered for the Challenge.

Anastassiou and his teammates see this achievement as an important validation of their model, particularly because it uses features (the attractor metagenes) which they had independently discovered to be present in multiple cancers before they entered the Challenge, without considering any association with prognosis. “If these universal signatures of cancer are prognostic in breast cancer, then why not in other types of cancer? And if they are useful for prognosis, why not for predicting drug response as well?” remarks Anastassiou. He and his students now hope that their characterization of attractor metagenes could lead to the development of universal biomarkers that could ultimately help to improve diagnosis and treatment for many different cancer types.

Learn more about attractor metagenes in this February 2013 paper in PLOS Computational Biology.