At the Vanguard of a Revolution in Computational Genetics 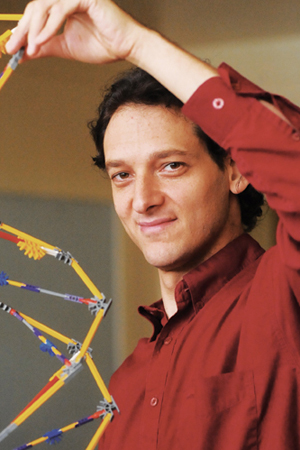 Itsik Pe'er, an Associate Professor in the Department of Computer Science and member of the Columbia Initiative in Systems Biology, is using mathematics and computer analytics to identify the genetic makeup of the founding Ashkenazi Jews. By analyzing the full DNA sequences of hundreds of their descendants in the New York City area and comparing them to reference sets of non-Ashkenazi DNA, his goal is to identify Ashkenazi-specific genetic mutations associated with diseases such as Tay-Sachs, Crohn's, and Parkinson's disease. As a new article in Columbia News explains:

By examining similarities in DNA segments shared by large numbers of related individuals, his lab developed statistical models that allow him to make generalizations about entire populations. The mix of genes that every child inherits from each parent travels in long sequences of code that remain together and are remarkably consistent from one generation to the next.

"The size of the gene chunks gets smaller with each generation, but they diminish at a consistent and predictable rate. As a result, Pe’er can use his models to determine distant relationships shared by two individuals by measuring the length of their common DNA segments."