Clinical Trials for Cancer, One Patient at a Time 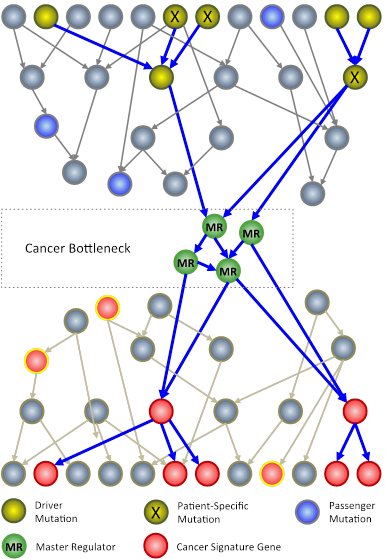 In an N-of-1 study, researchers at Columbia University use techniques from systems biology to analyze genomic information from an individual patient’s tumor. The goal is to identify key genes, called master regulators  (green circles), which, while not mutated, are nonetheless necessary for the survival of cancer cells.

Columbia University Medical Center (CUMC) researchers are developing a new approach to cancer clinical trials, in which therapies are designed and tested one patient at a time. The patient’s tumor is “reverse engineered” to determine its unique genetic characteristics and to identify existing U.S. Food and Drug Administration (FDA)-approved drugs that may target them.

Rather than focusing on the usual mutated genes, only a very small number of which can be used to guide successful therapeutic strategies, the method analyzes the regulatory logic of the cell to identify genes and gene pairs that are critical for the survival of the tumor but are not critical for normal cells. FDA-approved drugs that inhibit these genes are then tested in a mouse model of the patient’s tumor and, if successful, considered as potential therapeutic agents for the patient — a journey from bedside to bench and back again that takes about six to nine months.

“We are taking a rather different approach to tailor therapy to the individual cancer patient,” said principal investigator Andrea Califano, PhD, Clyde and Helen Wu Professor of Chemical Systems Biology and chair of CUMC’s new Department of Systems Biology. “If we have learned one thing about this disease, it’s that it has tremendous heterogeneity both across patients and within individual patients. When we expect different patients with the same tumor subtype or different cells within the same tumor to respond the same way to a treatment, we make a huge simplification. Yet this is how clinical studies are currently conducted. To address this problem, we are trying to understand how tumors are regulated one at a time. Eventually, we hope to be able to treat patients not on an individual basis, but based on common vulnerabilities of the cancer cellular machinery, of which genetic mutations are only indirect evidence. Genetic alterations are clearly responsible for tumorigenesis but control points in molecular networks may be better therapeutic targets.”

Dr. Califano and his colleagues are currently testing this individualized approach to cancer in a handful of patients with gastric and neuroendocrine tumors. Based on what they have learned from these “N-of-1” studies, they are designing a new clinical trial protocol to study an estimated 30–40 patients with pancreatic, gastric, neuroendocrine, and other tumors that have not responded to conventional therapy. (In clinical trials, “N” refers to the number of patients in a study.) While current trials are no longer open for enrollment, new trials will open for enrollment over the next one to two years; information will be posted on the websites listed at the head of this news release.

According to Dr. Califano, the N-of-1 approach upends the traditional model of clinical trials, in which a compound is tested in a group of patients with a similar condition. If a high percentage of patients with a specific profile respond positively, researchers can predict that a similar percentage will do so in the future. Yet why some patients in a study respond while others do not is poorly understood. Also, many cancer patients who initially respond later relapse and no longer respond. If the N-of-1 approach is successful, clinical trials may be designed to identify optimal treatment for cancer patients drawing from a toolkit of available FDA-approved drugs used individually or in combination.

“We reverse engineer the patient’s tumor, much as you would an unknown piece of machinery that no longer works properly,” said Dr. Califano. “We analyze DNA and RNA sequences from a single tumor using systems biology tools, including computational models that require supercomputers, to understand how tumor cells are regulated and to identify the critical ‘bottlenecks’ or ‘master regulator’ genes — i.e., key genes whose activity is necessary to maintain the tumor. For instance, in collaboration with  Antonio Iavarone and  Anna Lasorella, we showed that the combined activity of two genes, CEBPB and STAT3, is required for the viability of the most aggressive glioblastoma, but not for normal cells, even though the two genes are not mutated in these tumors [ please  click here to read a news release about this research ]. Since then, we have identified similar master regulator genes, with virtually identical properties, in many other tumor types.”

"The challenge for biologists is to learn how all the components of a given system work together to produce specific phenotypes and thus to identify the master regulators of the disease that may be targeted with drugs."

Once the mechanism of the patient’s individual tumor has been identified, the next step is to test a small number of the appropriate FDA-approved drugs, first in laboratory cultures and then in a “mouse avatar” —either an existing mouse model that closely matches the patient’s tumor or one created by implanting the patient’s tumor tissue into a mouse—so the drugs can be tested  in vivo . Drugs that are effective in the mouse model, individually or in combination, would then be considered as a therapeutic option for the patient. The entire process requires a large team of experts: Molecular oncologists, pathologists, geneticists, systems biologists, pharmacologists, and clinicians all work together to solve a cancer patient’s individual molecular puzzle.

When a drug is effective, the researchers expect that other patients whose tumors have the same master regulators could be treated with the same drug, extending the benefits from one patient to many. And by targeting pathways unique to the cancer cells, the researchers hope to reduce undesired toxicity effects.

“Since the completion of the Human Genome Project in 2003, it has become increasingly clear that most phenotypes — the observable traits of an organism — do not result from single genes or isolated events,” said Dr. Califano. “Rather, they emerge from the interaction of thousands of molecular components under the control of a complex cell-regulatory logic. If this regulation is disrupted — for example, through a set of genetic and epigenetic factors, such as mutations, infection, and inflammation — the resulting cascade of events may cause disease. The challenge for biologists is to learn how all the components of a given system — the cells, proteins, genes, and epigenetic factors that influence the genes — work together to produce specific phenotypes and thus to identify the master regulators of the disease that may be targeted with drugs. Interestingly, very few of the master regulators that we have experimentally validated are directly genetically or epigenetically altered. This suggests that the gene we eventually want to target to cure cancer could be different from the ones that start it.”