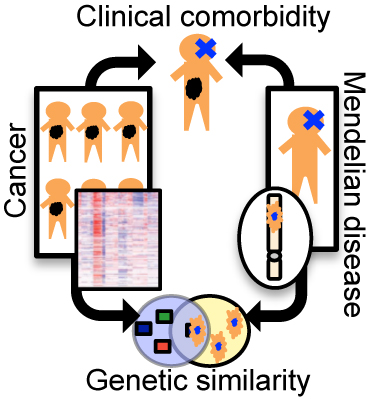 Researchers in the Rabadan Lab have found that comorbidity between Mendelian diseases and cancer may result from shared genetic factors.

Genetic diseases can arise in a variety of ways. Mendelian disorders, for example, occur when specific mutations in single genes — called germline mutations — are inherited from either of one’s two parents. Well-known examples of Mendelian diseases include cystic fibrosis, sickle cell disease, and Duchenne muscular dystrophy. Other genetic diseases, including cancer, result from somatic mutations, which occur in individual cells during a person’s lifetime. Because the genetic origins of Mendelian diseases and cancer are so different, they are typically understood to be distinct phenomena. However, scientists in the Columbia University Department of Systems Biology have found evidence that there might be interesting genetic connections between them.

In a paper just published in Nature Communications, postdoctoral research scientist Rachel Melamed and colleagues in the laboratory of Associate Professor Raul Rabadan report on a new method that uses knowledge about Mendelian diseases to suggest mutations involved in cancer. The study takes advantage of an enormous collection of electronic health records representing over 110 million patients, a substantial percentage of US residents. The authors show that clinical co-occurrence of Mendelian diseases and cancer, known as comorbidity, can be tied to genetic changes that play roles in both diseases. The paper also identifies several specific relationships between Mendelian diseases and the cancers melanoma and glioblastoma.

The article grew from Dr. Melamed’s PhD thesis, completed earlier this year, which built on a previous collaboration between the Rabadan Lab and that of Andrey Rzhetsky (University of Chicago). In that earlier work, the investigators mined a huge collection of electronic health records to determine the extent to which genes responsible for Mendelian diseases also raised a patient’s risk of developing other complex diseases. In her thesis, Melamed ran with this idea in the context of cancer genomics, hypothesizing that comorbidity between a Mendelian disorder and cancer might result from overlap between the genes responsible for each disease.

To ascertain whether this is true, she and her colleagues first analyzed data from the same collection of electronic health records used in the earlier study, looking for patients who both had a Mendelian disorder and developed cancer. They then investigated whether the genes responsible for the Mendelian disorders were related to genes frequently mutated across more than 5000 tumors represented in The Cancer Genome Atlas (TCGA). Using multiple measures of genetic similarity — including shared genes, shared molecular pathways, and gene–protein interactions — they showed that there is greater than expected similarity between the genes involved in Mendelian disease and the somatic alterations involved in the comorbid cancers seen in those patients.

The authors also discovered several specific connections between Mendelian disorders and cancer. For example, they found that genes associated with melanoma are also found in oculocutaneous albinism, a disorder that affects the pigmentation of the skin, hair, and eyes. In addition, investigations of Diamond-Blackfan anemia, a blood disorder, and holoprosencephaly, a disorder in cranial development, identified genetic connections with glioblastoma, the most aggressive form of brain cancer.

"Comorbidity between Mendelian disease and cancer may be due to germline mutations that provide a fertile ground for the growth of certain aberrant cells.”

Summarizing the implications of these discoveries, the authors write, “[T]his suggests that comorbidity between Mendelian disease and cancer may be due to germline mutations that provide a fertile ground for the growth of certain aberrant cells.” They also write that some Mendelian diseases predispose patients to multiple types of cancer, a finding that is in line with a growing body of evidence that many tumor mutations have “pan-cancer” effects.

The Rabadan Lab’s method is interesting not only because it provides a clearer picture of the genetic basis of comorbidities, but also because the cancer-associated genes it identifies are likely to be present in some tumors even in the absence of comorbid Mendelian disease. It therefore complements other methods for identifying cancer genes, as the role of cancer genes in a Mendelian disease can provide clues to their functions in the cancer. In the future, the authors predict, drugs targeting mutations shared between Mendelian disease patients and cancer patients could be repurposed based on the comorbidity between the diseases.