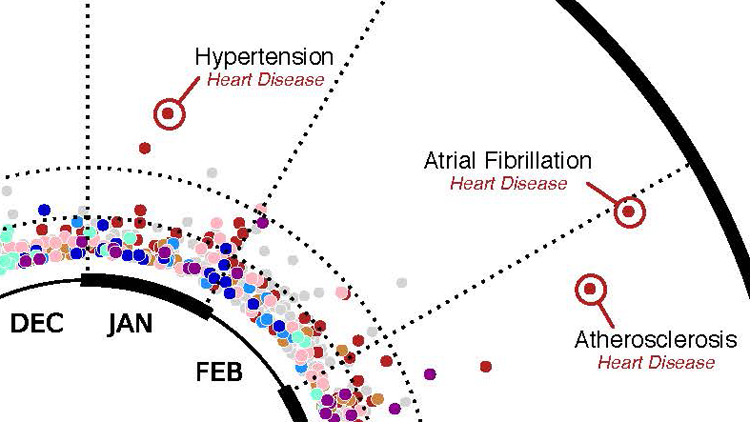 Columbia University Medical Center reports on a new study in the Journal of American Medical Informatics Association led by Nicholas Tatonetti, also an assistant professor in the Department of Systems Biology.

Columbia University scientists have developed a computational method to investigate the relationship between birth month and disease risk. The researchers used this algorithm to examine New York City medical databases and found 55 diseases that correlated with the season of birth. Overall, the study indicated people born in May had the lowest disease risk, and those born in October the highest. The study was published this week in the Journal of American Medical Informatics Association.

“This data could help scientists uncover new disease risk factors,” said study senior author Nicholas Tatonetti, PhD, an assistant professor of biomedical informatics at Columbia University Medical Center (CUMC) and Columbia’s Data Science Institute. The researchers plan to replicate their study with data from several other locations in the U.S. and abroad to see how results vary with the change of seasons and environmental factors in those places. By identifying what’s causing disease disparities by birth month, the researchers hope to figure out how they might close the gap.

For the complete article and to see a video interview with Dr. Tatonetti, visit the CUMC Newsroom.