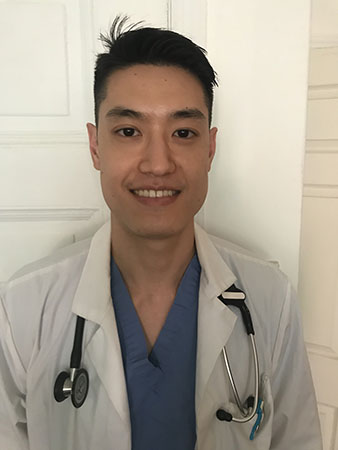 For Brian Ji, the big draw to systems biology stemmed from his passion for applying quantitative approaches to understanding biology. While an undergraduate at the University of Wisconsin-Madison, Ji studied nuclear engineering and credits that training for the way in which he tackles scientific questions: creatively, and as a problem solver.

“There is no one right approach to asking a question and setting out to answer it, and that freedom is what makes science fun for me,” he says.

Ji studied under Dr. Dennis Vitkup in the Vitkup lab and completed his thesis defense for systems biology in the fall of 2018.  Also an MD student in Columbia’s Vagelos College of Physicians and Surgeons , Ji was attracted to Columbia because of the close interplay between the Systems Biology Department and the Columbia University Irving Medical Center. “Ultimately,” he says, “the opportunity to sit at the intersection between math, biology and medicine was too good to pass up.”

Ji’s PhD work focused on understanding spatiotemporal dynamics of human gut microbiota. He developed several frameworks that leveraged the increasing availability of high-throughput sequencing data to better understand and precisely quantify patterns of human gut microbiota variability across time and space. His work showed that characterizing dynamics—changes in bacterial abundances in our gut—are critical to understanding how these ecosystems function and is highly connected to multiple factors such as host diet, travel and diet.

Ji also spent part of his PhD studying limitations of cancer cell growth in different environmental conditions. He credits Columbia for exposing him to a variety of research topics.

“I had a unique opportunity to explore diverse areas of systems biology in the Vitkup lab,” says Ji. “We also worked closely with experimental collaborators in the Vander Heiden Lab at MIT, and the Harris Wang Lab at Columbia. In that sense, I received strong training as a computational biologist but with a great understanding and appreciation for experimental biology.”

After medical school, Ji intends to continue his medical training in residency. Down the road, he hopes to establish his own research lab at an academic institution while also practicing medicine, potentially specializing in oncology.

Raised in Madison, WI, Ji followed in his parents’ footsteps; both were scientists. He caught the scientific “bug” early on.

“I knew that I wanted to do science at a young age. The freedom and creativity of solving scientific problems has always been the most enjoyable aspect to me. At the same time it is what makes science so challenging, but also really fun.”