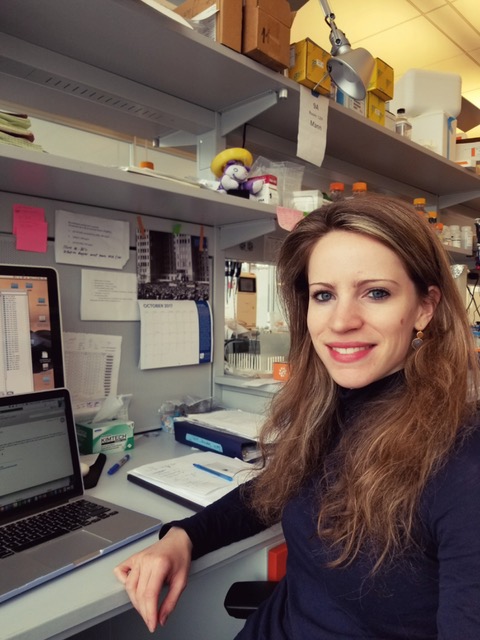 As a child growing up in a small town in Germany, Judith Kribelbauer excelled in science, counting chemistry and mathematics as her two favorite subjects from grade school through high school. After high school graduation, she attended the Ruprecht-Karls University in Heidelberg to pursue a bachelor’s degree in chemistry, which she completed in 2012.

Becoming more serious about pursuing scientific research, Kribelbauer, who is graduating this May with a PhD in the Systems Biology Integrated Program, moved to the U.S. to work as a graduate exchange student at the University of North Carolina-Chapel Hill (UNC) before enrolling at Columbia University in 2013. At UNC, using SHAPE-MaP sequencing technology, she researched the structural basis of the HIV-1 RNA frame-shift element, a sequence that causes ribosomes to shift reading frames, therefore producing truncated proteins.

Columbia’s collaborative environment—the chance to work with researchers spanning areas from biology to chemistry and physics to computer science—is what drew her to the University and ultimately to concentrating in systems biology.

“Thanks to this unique environment, I could realize my dream research project—combining both experimental and computational approaches,” says Kribelbauer. “This comprehensive training allowed me to conduct my thesis research in two labs, with both PhD advisers having appointments in Systems Biology.”

Kribelbauer, who officially switched from biochemistry to the systems biology track once it became a full-fledged department in 2014, split her time between the laboratories of Harmen Bussemaker, PhD , and Richard Mann, PhD . Under their guidance, Kribelbauer aims to understand at a mechanistic level how a specific class of proteins, called transcription factors, recognize and bind the DNA of a target gene and by doing so, regulate that particular gene’s transcription. Her research focuses on developing new high-throughput experimental and computational methods to characterize transcription factor binding under such altered conditions as in the presence of cofactors and enzymatically modified DNA. In 2015, she was awarded a Howard Hughes Medical Institute international student fellowship in support of her thesis research.

“Ultimately, we want to build better models of transcription factor binding that can help us understand the complex regulatory systems cells have put in place to guarantee that a gene is only expressed at the right time and in the right location,” she says. “This is important, as a dysfunctional gene regulatory network can lead to disease.”

In one study for instance, Kribelbauer and her colleagues identified that DNA binding by the tumor suppressor protein p53 is influenced by chemical DNA modifications, which was completely unknown beforehand and could have implications for future studies investigating the link between dysfunctional p53 binding and cancer.

In addition to the many hours spent in the Bussemaker and Mann labs through her five years at Columbia, Kribelbauer has also had a chance to forge long-lasting friendships and carve time to go for runs and play volleyball, a sport she’s loved since middle school. Though scientific research can overrun one’s life, she maintains that spending long hours in the lab should never become the norm. As a PhD candidate, she adopted the mantra, “part-time hard worker”, meaning work hard when necessary, on a tight schedule and efficiently, but without dismissing other important parts of your life.

“It is way too easy to get into the habit of staying late in the lab, as there is always one more experiment to start or one last data set to analyze,” she says. “But taking breaks and balancing research and leisure time is not only important to stay motivated, but also helps to focus and to find solutions for the research problems at hand.”

This summer after graduation, Kribelbauer plans to spend a few months completing side research projects in collaboration with Columbia labs and labs at other institutions. She hopes to also take some time to consider ideas that have been brewing for future research projects before moving on to a fulltime postdoctoral position. Whether she ultimately lands a career as a professor or takes on a research position outside of academia, Kribelbauer remains optimistic and open to what lies ahead.

“During the past few years, I learned two things. One is that scientific success often involves a non-negligible amount of luck, and two, there is always something interesting to be learned from an experiment even if it does not support your initial hypothesis,” she says. “Both are important to keep in mind when planning your future career in science. The former one reminds me that it is important to be open to alternative career paths and the latter is what makes me continue the academic route and prevents me from being discouraged whenever things don’t go to plan.”