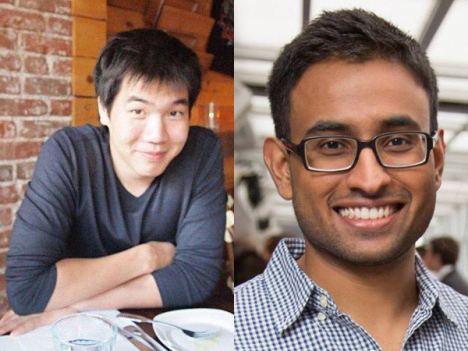 Congratulations to Columbia University graduate students Albert Lee and Chaitanya Rastogi, who have been named awardees of the Training Grant in Bioinformatics and Computational Biology. These competitive fellowships provide support for up to two years to outstanding students working toward a PhD in Department of Systems Biology laboratories.

Albert Lee is a member of the Rabadan Lab, where he is developing a software pipeline for the de novo assembly and annotation of high-throughput transcriptomic data. His research is driven by the fact that 75% of emerging infectious diseases (including the current Ebola outbreak in West Africa) are transmitted from animals to humans. To improve scientists’ ability to understand how such diseases arise in humans at the molecular level, his goal is to provide an efficient method for developing reference transcriptomes for species in which deadly viruses and drug-resistant pathogens originate. Doing so will provide opportunities for studying differences in RNA abundance between species, tissues, or disease states, as well as reliable computational and statistical frameworks for the analysis and interpretation of genomic high-throughput data. Lee says, “We believe that high-quality, annotated transcriptomes for non-model organisms such as bats will be great references for the study of disease, the immune system, and the regulation of biological processes.”

Chaitanya Rastogi, a member of the Bussemaker Lab, is developing biophysics-based models capable of describing interactions between DNA and transcription factors (TFs), proteins that play important roles in regulating gene expression. More specifically, he is investigating the hypothesis that epigenetic modifications such as cytosine methylation lead to structural changes in DNA that in turn affect TF binding specificity. To do so, he is working to extend the SELEX-seq protocol developed by the Bussemaker and Mann labs, which was initially designed to quantify the effect of sequence variation on TF binding affinity. Chaitanya is developing methods to incorporate methylation data and DNA shape readout into SELEX-seq, which will allow the researchers to quantify the contributions of DNA shape features to variations in binding affinity. Once the necessary algorithms are developed, he plans to build accurate and structurally interpretable models of binding specificity for a variety of TFs. This would make it possible to predict the effect of cytosine methylation on binding from standard high-throughput SELEX data generated by other groups.