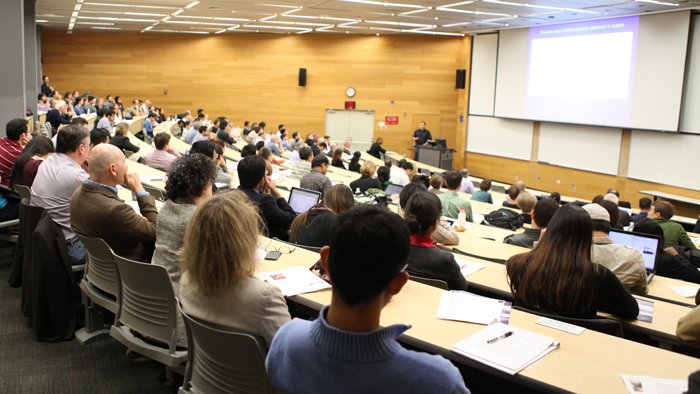 On Thursday, October 17 more than 200 attendees filled the Hammer Health Sciences Center auditorium to celebrate the recent creation of the new Columbia University Department of Systems Biology. The event featured a keynote address by pioneering systems and synthetic biologist James Collins, as well as talks from more than a dozen Department faculty members and other collaborating investigators that spotlighted the wide range of research in computational and systems biology being pursued at Columbia.

The Inaugural Symposium was the first public event held by the Department of Systems Biology since its creation in July 2013. Registrants included not only members of Department labs, but also many from other basic science and clinical departments across Columbia’s Medical Center and Morningside Heights campuses, as well as attendees from other academic institutions, the scientific press, and the pharmaceutical and biotechnology industries. 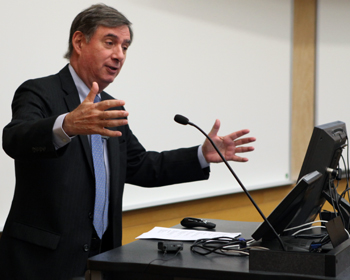 In opening remarks, Lee Goldman, Dean of the Faculties of Health Sciences and Medicine at the College of Physicians and Surgeons, suggested that the tools offered by systems biology have already begun to transform biological and biomedical research being pursued across Columbia. Pointing to one example, Stephen Emerson, Director of the Herbert Irving Comprehensive Cancer Center, explained that the evolution of systems biology as a discipline has made it an increasingly important part of the cancer research being pursued at the university. “Early in the development of interdisciplinary research in mathematics and biology,“ he remarked, “the problem was that although you could model anything, coming up with a prediction that would matter or that could be tested in the laboratory was a far way off. That has now dramatically changed, and this is why collaboration between the Cancer Center and the department is such a big deal. We’re now in a position to look together at what can be modeled and what can be predicted in clinical trials for therapies for our patients. This is really, really important.”

The Department of Systems Biology has also undertaken a number of collaborations with Columbia researchers who study biology related to disorders of the brain and spine. Christopher Henderson of the Motor Neuron Center, Columbia Stem Cell Initiative, and Columbia Translational Neuroscience Initiative discussed research at Columbia that has involved the use of high-throughput screening and network models to expand scientists’ understanding of biological development and to identify chemical compounds that hold therapeutic potential. He pointed out that Columbia researchers studying problems related to synaptic function, motor neuron development, and stem cell differentiation, as well as therapeutic areas such as ALS, Alzheimer’s disease, and spinal cord injury have turned to the Department of Systems Biology and its Columbia Genome Center for assistance in their research. Systems biology approaches, Henderson said, “have allowed us to study these intractable problems in brain development and nervous system disease.”

"We’re now in a position to look together at what can be modeled and what can be predicted in clinical trials for therapies for our patients. This is really, really important.”

Interdisciplinary research is a hallmark of systems biology research at Columbia, explained Department Chair Andrea Califano. “That’s the way we like to think of ourselves,” he said. “Today we’re celebrating not just the department itself, but also the incredible admixture of people and other departments into what has become the Columbia Department of Systems Biology. This approach to science also extends far beyond the walls of Columbia itself to include many other institutions through collaborations.”

Reviewing the history that led to the creation of the Department of Systems Biology, Califano and Barry Honig, Director of the Center for Computational Biology and Bioinformatics, recognized a number of individuals whose early support of computational biology and genomics played an important role in establishing the discipline at Columbia. Among these was Judith B. Sulzberger, who provided the initial endowment of $10 million that launched the Columbia Genome Center in 1995, and whose $20 million bequest in 2011 enabled a vibrant campaign of faculty recruitment. Also acknowledged as critical early proponents of computational biology at Columbia were Isidore Edelman, who founded the Columbia Genome Center, and Gerald Fischbach and Harvey Colten, who recognized the great potential of computational biology and provided startup funds as well as laboratory and administrative space to the former Columbia Initiative in Systems Biology. Califano and Honig also recognized Anke Nolting, Associate Dean and Executive Director of Development, and Lee Goldman as key supporters of initiatives in systems biology, as well as and Clyde and Helen Wu, whose philanthropy has supported several department chairs at Columbia. 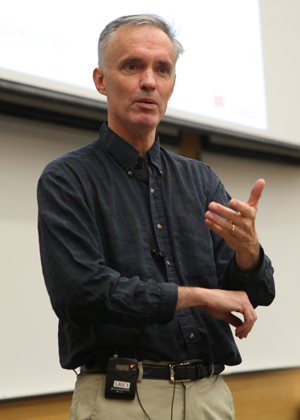 In his keynote address, James Collins, a professor of biomedical engineering at Boston University and investigator of the Howard Hughes Medical Institute, surveyed some high points in his lab’s efforts to use engineering–based methods to understand and manipulate biological systems. Among his team’s accomplishments are the development of genetic “toggle switches” that can be controlled to alternate between two stable states in the cell, and the creation of RNA-based “riboswitches” that can block production of a specific protein or control the amount of protein that a gene produces — like a dimmer switch on a light bulb. From the perspective of synthetic biology, these tools now offer scientists the ability to regulate gene expression and generate specific proteins and chemicals of interest.

Within the context of systems biology these tools, along with concepts from control theory, have enabled the Collins Lab to reverse engineer regulatory networks within cells. By selectively making parts of networks more or less active and observing the effects of these transformations on phenotypes, they are gaining insights into the networks that control biological function as well as drug mechanisms of action.

In recent years, Collins has focused on using approaches based in systems biology and synthetic biology to understand how antibiotics work, and to reveal strategies for improving their effectiveness, particularly in the face of increasingly widespread multidrug-resistant bacterial strains. His lab’s efforts have showed that for a variety of antibiotics, including quinolones, aminoglycosides, and beta-lactams, a part of their mechanism of action is to cause mitochondrial dysfunction and the overproduction of reactive oxygen species, which leads to oxidative stress that damages DNA and contributes to the bacteria’s death. Using techniques from synthetic biology, he reported, the researchers then engineered a bacteriophage that could enter E. coli and block the bacteria’s DNA-repair mechanism, boosting the killing efficiency of quinolones by up to 10,000-fold. They have also explored methods for using bacteriophages that can enter drug-resistant bacteria, express a protein that blocks their defense mechanisms against drugs, and resensitize them to antibiotic agents.

"Putting resources behind [systems biology] is going to make a big difference for the training of the next generation, and for biomedicine."

Most recently, Collins and his colleagues have begun investigating the microbiome, a term that refers to the diverse populations of bacteria that reside in the human gut. Research over the past few years has showed that the microbiome may play an important role in human health, particularly in relation to metabolic disorders such as diabetes and obesity. Collins’s goal is to be able to better understand the regulatory networks that maintain these bacterial systems and to use this knowledge to develop methods for reprogramming their molecular circuitry using rationally designed probiotics or bacteriophage vectors.

At the conclusion of his talk, Collins saluted Columbia University for its support of systems biology through the creation of the new department. “This is not just a great development for Columbia,” he said, “but it’s also a very big development for our field to have one of the world’s best universities recognize the field as a real entity. Putting resources behind it is going to make a big difference for the training of the next generation, and a real difference for biomedicine.”