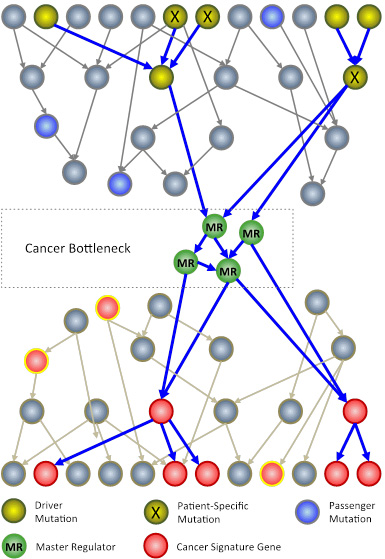 The N of 1 trial leverages systems biology techniques to analyze genomic information from a patient’s tumor. The goal is to identify key genes, called master regulators (green circles), which, while not mutated, are necessary for cancer cell survival. Master regulators are aberrantly activated by patient-specific mutations (X symbols) in driver genes (yellow circles), which are mutated in large cancer cohorts. Passenger mutations (blue circles) that are not upstream of master regulators have no effect on the tumor. (Image: Courtesy of the Califano Lab)

A novel N of 1 clinical trial led by the Califano Lab at Columbia University Irving Medical Center is focusing on rare or untreatable malignancies that have progressed on multiple lines of therapy, with the goal of identifying and providing more effective, customized therapies for patients. The approach is grounded in a computational platform developed over the last 14 years by the Califano Lab to allow accurate identification of a novel class of proteins that represent critical tumor vulnerabilities and of the drug or drug combination that can most effectively disarm these proteins, thus killing the tumor. Platform predictions are then validated in direct tumor transplants in mice, also known as Patient-Derived Xenografts (PDX).

“We call these proteins master regulators and have developed innovative methodologies that allow their discovery on an individual patient basis,” said Dr. Andrea Califano , Clyde and Helen Wu Professor of Chemical and Systems Biology and chair of the Department of Systems Biology at Columbia. 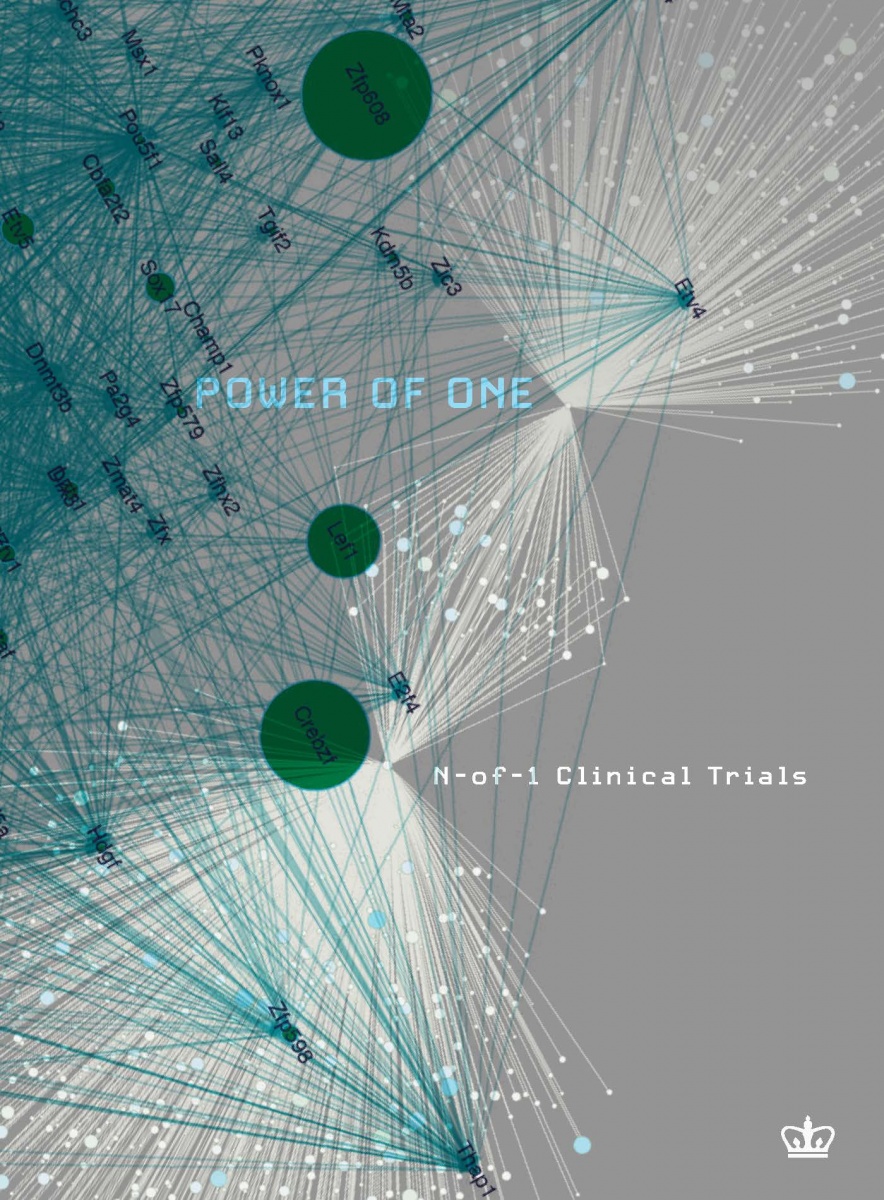 Surprisingly, master regulators are almost never mutated – meaning they are not conventional oncogenes. As such, they cannot be identified by standard cancer genome sequencing approaches. Rather, they work in concert to create informational bottlenecks, so to speak, responsible for integrating the effect of multiple driver mutations in their upstream pathways, thus providing a sort of centralized “engine room” for the cancer cell, controlling the genetic programs necessary for its survival in the specific milieu in which the tumor is growing. Dr. Califano and his team have developed methodologies to computationally identify and experimentally validate master regulators for virtually any tumor type—from lymphomas and leukemias, to prostate, neuroendocrine and breast cancers.

“Importantly, this methodology can now be applied even on an individual patient biopsy basis and tested in the patient’s specific tumor ‘avatar’ – i.e., the mice that have been transplanted with the patient’s tumor – thus underscoring our aim to advance precision cancer medicine,” Dr. Califano explained. “We are now extending it to work on individual cells within an individual tumor, such that an optimal cocktail of drugs may be selected to kill tumor cells representing different developmental states, from tumor initiating cells [sometime called tumor stem cells] to fully differentiated ones, which present different drug sensitivities.”

Unlike standard clinical trials, the N of 1 approach targets each patient on an individual basis. This approach is especially promising for patients who, following initial response to a standard of care drug or drug combination, may relapse thus providing few effective therapeutic strategies to the treating oncologist other than best guess. Utilizing the computational framework developed in the Califano Lab attempts to reduce and hopefully eliminate the need to guess the next best therapy for a patient.

In their N of 1 trial, the Califano Lab, with collaborators Gary Schwartz, MD , at Columbia’s Herbert Irving Comprehensive Cancer Center , Hanina Hibshoosh, MD , at Columbia’s Department of Pathology and Cell Biology and Andrew Kung, MD, PhD , at Memorial Sloan Kettering, is only considering FDA-approved drugs and investigational compounds that have already been shown to be safe in humans. This makes it possible to bring any positive findings directly to patients.

The study leverages two complementary computational strategies for drug prioritization – OncoTarget and OncoTreat – both now available as New York State Department of Health approved tests through the Department of Pathology and Cell Biology at Columbia. The tests are licensed from DarwinHealth , a cancer research company born out of the Califano Lab.

Specifically, the OncoTarget analytical platform, developed by the Califano Lab, systematically assesses whether any of the proteins, for which an FDA-approved or investigational drug is already available, may be abnormally activated in the tumor.

Complementary to this method, the OncoTreat analytical platform identifies all the top master regulators of a tumor and uses actual drug perturbations to identify the individual drugs and/or drug combination that can revert their activity at once. The proof-of-concept for this platform was recently detailed and published in a Nature Genetics paper. In cell lines and PDX models, the team has already shown that abnormal oncoprotein activity significantly outperforms mutational analysis in assessing sensitivity to targeted drugs. In particular, both OncoTarget and OncoTreat can systematically identify effective drugs and/or drug combinations, independent of the presence of specific mutations in the tumor.

Use of Master Regulator analysis methodologies has already led to several discoveries now being tested in the clinic. To name a few:

• It was used to discover a combination therapy (Ruxolitinib and Trastuzumab) for HER2 positive metastatic breast cancer, specifically for patients whose tumors no longer responded to Trastuzumab alone. A clinical trial with pharmaceutical companies Incyte and Novartis just advanced to phase II following promising results from a phase Ib study.

• It led to discovery of HDAC6 as a novel target for inflammatory breast cancer, leading to a Phase Ib study with an Acetylon inhibitor (now owned by Celgene)

• It helped identify Entinostat as a powerful single-drug therapy for a subset of metastatic gastroenteropancreatic neuroendocrine tumors; this led to rapid IND approval by the FDA for a clinical trial with Syndax Pharmaceuticals that is now enrolling participants.

To date, the N of 1 trial has resulted in more than 45 successful patient tumor transplants in mice and 20 PDX (patient-derived xenograft) models. Treatment of the first seven models with 34 drugs prioritized by the OncoTarget/OncoTreat analytical platform have produced remarkable results, with 60% of the predicted drugs leading to tumor size reduction or growth arrest in animal models.