The cell-of-origin model in cancer biology suggests that some tumors are more aggressive than others because of differences in the cell lineages from which they arise. In the prostate gland, there are three types of epithelial stem cell — luminal cells, basal cells, and rare neuroendocrine cells. There has been some discrepancy in the scientific literature, however, about whether luminal cells, basal cells, or both can act as a cell of tumor origin.

The studies showed that discrepancies in the published literature arise because basal stem cell properties can change when studied outside their endogenous tissue microenvironment; that is, in ex vivo cell culture and tissue grafting assays. To avoid this problem, they suggest, genetic lineage tracing in vivo should be considered the gold standard for identifying physiologically relevant stem cells. 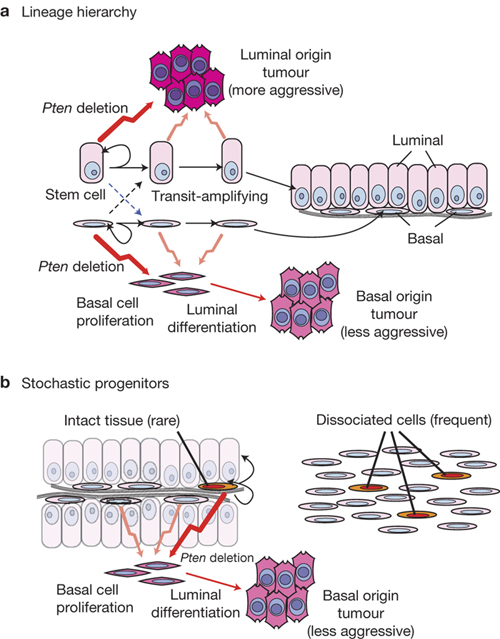 Basal and luminal cell lineages are largely independent in the adult prostate, but rare basal and luminal stem/progenitor cells can potentially compensate for imbalances in cell number during regeneration and tissue homeostasis. One possible model (a) is that rare basal (and luminal) stem/progenitor cells may reside at the top of an epithelial lineage hierarchy, and a larger subpopulation of basal cells, perhaps corresponding to transit-amplifying cells, can exhibit plasticity in sphere and tissue reconstitution assays. Alternatively (b), basal cells may exhibit stochastic stem/progenitor properties, with a low probability in the adult prostate epithelium and a higher probability when explanted or transformed.

In addition, a combination of molecular and bioinformatics analysis showed that tumors that originate from luminal cells are more aggressive than those that develop from other cell types. Bioinformatics studies also identified a cross-species molecular signature within mouse luminal cells that correlates with human patient outcomes.

Identifying cells of tumor origin and determining their specific molecular signatures holds potential for identifying biomarkers of specific prostate cancer subtypes. Further research in this area could provide valuable information that could be used to distinguish high- from low-risk patients and to predict treatment response.