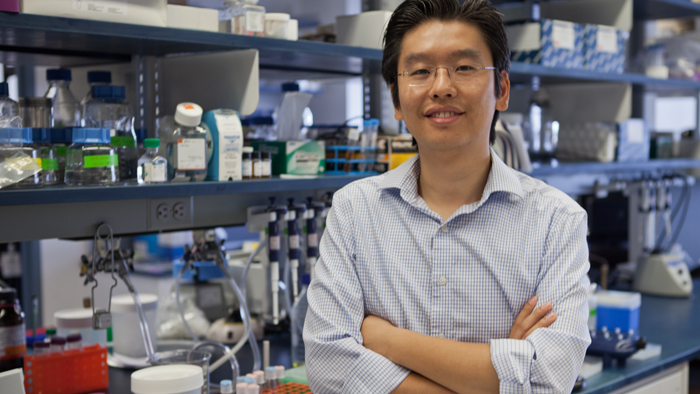 Harris Wang, PhD, assistant professor of systems biology at Columbia University Irving Medical Center , is leading a team of experts in radiation research, CRISPR-Cas technologies, and drug delivery on an innovative new project announced June 27 funded by the Defense Advanced Research Projects Agency (DARPA) . The up to $9.5M project focuses on pursuing a therapy to protect the body from the effects of high-dose ionizing radiation, and is part of DARPA's initiative to fund research into new strategies to combat public health and national security threats.

In humans, acute radiation syndrome primarily affects stem cells in the blood and gut, yet existing treatments only help to regenerate blood cells, and only with limited effect. There is no possibility for prophylactic administration of these drugs, and most must be delivered immediately following radiation exposure to provide any benefit. There are no existing medical countermeasures for radiation damage to the gut.

The Columbia team aims to develop an orally delivered programmable gene modulator therapeutic. The multimodal treatment the team envisions would take hold in both the gut and liver, triggering protection and regeneration of intestinal cells, while also inducing liver cells to produce protective cues that trigger the regeneration of blood cells in bone marrow.

Dr. Wang, who also has a joint appointment in pathology and cell biology , is collaborating with radiation research experts David Brenner , PhD, and Sally Amundson, ScD, of Columbia’s Center for Radiological Research ; Alejandro Chavez , MD, PhD, of the Department of Pathology and Cell Biology, a specialist in the fast-growing CRISPR field; and Kam Leong , PhD, of Columbia Engineering , a pioneer in biomaterials, nanomedicine, and drug delivery.

Dr. Wang’s team is one of five teams selected by DARPA to participate in its Preemptive Expression of Protective Alleles and Response Elements (PREPARE) program. Each team has received an award to develop new medical interventions that temporarily and reversibly modulate the expression of protective genes to specifically guard against acute threats from either ionizing radiation or influenza. Ultimately, the technology could serve as the foundation for a generalizable platform that can be rapidly adapted to other emerging public health and national security threats.

Dr. Wang and the other PREPARE teams expect to submit at least one product each to the U.S. Food and Drug Administration (FDA) for review as an investigational new drug (IND) by the end of the four-year program period.