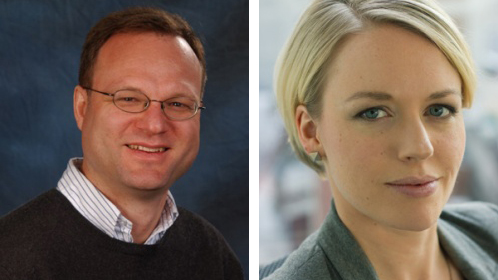 Harmen Bussemaker, PhD, and Tuuli Lappalainen, PhD, have received an inaugural Roy and Diana Vagelos Precision Medicine Pilot Award for a collaboration that will bridge quantitative genetics and mechanistic biology to obtain a mechanistic understanding of regulatory effects of genetic variants in humans.

Drs. Bussemaker and Lappalainen, both faculty in Columbia’s Department of Systems Biology, represent one of three winning proposals out of a pool of 56 applications. Their project titled, “Elucidating the tissue-specific molecular mechanisms underlying disease associations through integrative analysis of genetic variation and molecular network data”, will help to advance Columbia University’s efforts in precision medicine basic science research.

As reported by Columbia Precision Medicine, the investigators’ research objectives include: to dissect the molecular mechanisms underlying tissue-specificity of genetic regulatory variants and to map network-level regulatory variants that cause protein-level transcription factor (TF) activity to vary between individuals. The investigators will infer TF activity based on DNA binding specificity models of human TFs, and use it as a tissue-specific parameter of the cellular environment. They will also map trans-acting genetic variants that affect TF activity (coined ‘aQTLs’ by one of the investigators) in each tissue. The investigators hope to elucidate which transcription factors are driving the functional impact and tissue specificity of any particular eQTL, genomic loci that contribute to variation in gene expression levels.

Dr. Bussemaker, professor of biological sciences, is a leader in the field of motif discovery and quantitative prediction of protein-DNA interaction and is pioneering methods that explain changes in global gene expression pattern in terms of modulation of protein-level activity of transcription factors. Dr. Lappalainen, assistant professor of systems biology and core faculty member of the New York Genome Center, is an expert in characterizing functional genetic variation in human populations, based on integration of human population-scale genome and transcriptome sequencing data sets.

To read more about their winning project and about their fellow awardees, visit Columbia Precision Medicine.