A Jack of All Trades: An Interview with Kam Leong 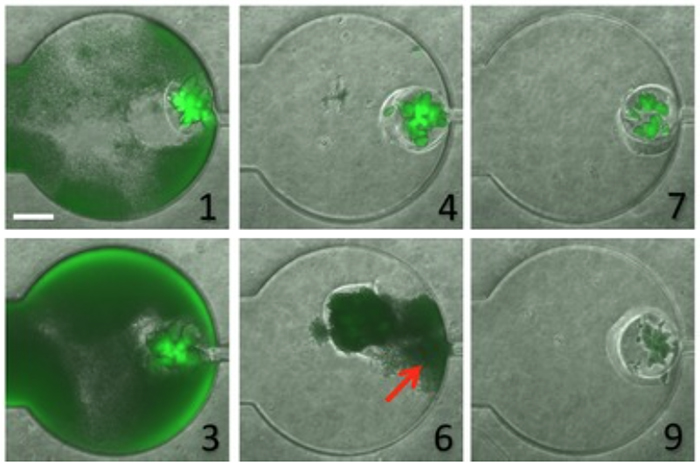 In a recent paper published in Molecular Systems Biology, Kam Leong describes a two-compartment microfluidic device that consists of a chamber within which is embedded a "microbial swarmbot" that is isolated by a permeable hydrogel shell. In collaboration with Lingchong You (Duke University), Leong used the device to regulate the dynamics of a population of bacteria containing a genetically engineered switch that reacts to population size. The scale bar in panel 1 represents a length of 250 micrometers.

With a restless curiosity, Kam Leong always seems to be on the lookout for new problems to solve. A versatile biomedical engineer originally trained in chemical engineering, he has developed an impressive array of innovative nanotechnologies that have opened up new opportunities in biomedical research and drug delivery.

The most widely known of his designs resulted from his work as a postdoc in the laboratory of MIT’s Robert Langer. While there, Leong played a critical role in the development of Gliadel, a controlled-release therapy that uses biodegradable polymer particles to deliver an anticancer drug to a brain tumor site following surgery. Since then his name has appeared on more than 70 patents covering a wide range of inventions — from microfluidics technologies, to scaffolds for growing organic tissues, to nanoscale fluorescent probes, to a method that uses nanoparticles instead of viruses for the oral delivery of gene therapies. These achievements have gained him widespread respect within the engineering community, as evidenced by his 2013 election to both the National Academy of Engineering and the National Academy of Inventors.

Dr. Leong joined Columbia University in 2014. Although his primary affiliation is with the Department of Biomedical Engineering, he was also attracted by the chance to assume an interdisciplinary faculty appointment in the Department of Systems Biology. Since his arrival he has been developing collaborations with several Systems Biology faculty members as well as other scientists at Columbia University Medical Center, and plans are underway for his lab to move into the Lasker Biomedical Research Building to better facilitate interactions with systems biology and clinical investigators. In the following interview, Leong describes why opportunities to interact with scientists in other disciplines is so important to his work, and how the kinds of technologies he has developed could be relevant for systems biology research, as well as for improving treatment of human diseases.

As an engineer, how did you become interested in the biomedical sciences, and how do you see your role?

My formal training was in chemical engineering, but as I was completing my PhD in the early 1980s I became attracted to the field of drug delivery. At the time there was a growing awareness that mass transport, which is something that we chemical engineers do, could be relevant for controlling how drugs move through the human body. Ever since then I’ve been passionate about finding ways to apply engineering concepts, principles, and technologies to advance medicine.

I am excited about being able to work in many different ideas and trying to integrate diverse thinking. That’s where innovation emerges.

I think of myself a jack of all trades, which isn’t always good, but it’s part of my nature. As biomedical engineers we develop many enabling technologies for basic biomedical scientific studies. Both biologists and engineers are problem solvers, but whereas biologists ask “Why?” as an engineer I am trying to understand "How?"

At the same time, however, science and medicine are really changing. Increasingly, it is interdisciplinary approaches that often work best now, and the groups that are most successful are capable of thinking beyond their own domain. Personally I am excited about being able to work in many different ideas and trying to integrate diverse thinking. That’s where innovation emerges.

For technologists and engineers like me it is also enormously helpful to be able to develop something useful. It is often said that engineers tend to develop a hammer and spend most of their time looking for nails. For our lab, working in close collaboration with medical researchers is very important because it enables us to find meaningful nails. At the same time, basic scientists might not know about tools that already exist that can help them answer their fundamental questions, and so I often find that conversations with them also lead to opportunities to investigate new kinds of problems.

Some of your best-known work focuses on using nanotechnology for drug delivery. What can nanotechnology offer in a medical context that other methods can’t?

One field that is important to my work is in using nanoparticles and nanostructures for gene delivery and for getting therapeutics such as proteins and polar compounds such as nucleic acids inside the cell. This kind of approach is very important, for example, in relation to DNA and RNA therapeutics. Here, the key question becomes how to bring the nucleic acid therapeutics inside the cell, execute them, and generate changes at the molecular level. To do this you need a good intracellular delivery system. Solving this problem is an important part of what my lab does.

At the same time, we have started to think about how this approach could be used in a high-throughput format. For example, we might have 10 different RNA candidates that might activate or block some pathway in the cell. In principle, we could deliver different sets of nanoparticles inside the cell to see which candidates would work well, both individually and in combinations. That’s also doable, although it’s not an approach that has been taken up by the nanomedicine community right now.

How do you see the technologies you’ve been developing as being useful within the context of systems biology?

The problem I often face as a biomedical engineer is that I always need to wait for someone to identify a microRNA of interest or some upstream molecule that controls cell functions. When I first talked with Andrea Califano and learned about his efforts to identify master regulators of cancer within gene networks, though, I started to wonder how nanomedicine approaches might help. 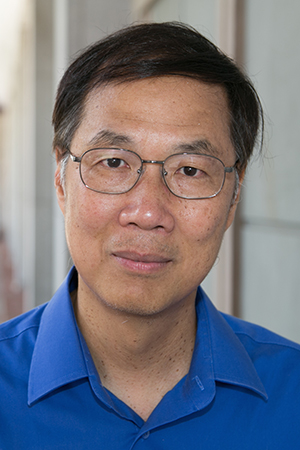 The challenge is similar to the ones we face in delivering microRNA into the cell for therapeutic purposes, but I started to wonder whether there might be an opportunity to use nanomedicine to help in the discovery of master regulators and genetic networks. For instance, one can use nanoparticles to deliver modified microRNAs that are more stable, or a panel of microRNAs for multiplexing. The nanoparticles can also be decorated with cell-specific ligands to target certain cell populations. There would be certain advantages of using such nanoparticles versus the conventional viral delivery approach in this context.

We are also interested in using our nanotherapeutics approach to support the field of regenerative medicine. As we gain a better understanding of the gene networks that are involved, we think we should be able to combine these technologies with systems biology approaches to think about how to reprogram a cell from one lineage to another. Working on a theoretical problem like stem cell differentiation is interesting to me because although I’m not the one to figure out what genes should be targeted, I can provide a brute force biochemical approach to actually do the reprogramming.

Another important field of your research involves microfluidics. What kinds of projects have you been working on, and how might these kinds of technologies help in biology?

We have used microfluidics-generated emulsions, or droplets, to synthesize DNA/RNA nanoparticles or to generate multi-cellular spheroids. Microfluidics technologies have many advantages. You can think about microfluidic droplets as a mini-bioreactor containing a very small volume. The volumes we are talking about are in the picoliter range, which is a reduction of 7 orders of magnitude in comparison with a 1 mL Eppendorf tube. When you perform experiments in small volumes like this, a variety of things, including mass transport, reaction rate, and reagent consumption are different. This offers advantages for faster kinetics and more controlled self-assembly. The droplet technologies can also be combined with other technologies like molecular beacons or biosensors to study single-cell dynamics and to produce sensitive signals.

If you place even just a few cells in a volume of this size they will aggregate because cell-cell contact — rather than cell-substrate interaction — is much more prominent. For this reason we are finding that one very useful approach is to make multi-cellular spheroids in a controlled manner. In one current project I’m collaborating with Harris Wang, and we’re helping him to use this droplet technology to study the interactions of bacterial communities in thousands of different droplets. My lab is also thinking of new ways for using microfluidics in the context of next-generation sequencing.

In addition, we recently used microfluidics in relation to synthetic biology. I was working with a colleague, Lingchong You at Duke University, who studies gene circuits. He was interested in introducing a gene circuit into bacteria that would switch in response to population size. We helped design a system we call a microbial swarmbot that can secrete a biochemical that kills the cells when the bacteria grow beyond a certain population. When the cell density returned to a certain threshold level, secretion of the chemical would stop and the bacteria would grow again. This could be used, for example, to keep proliferation of engineered bacteria from getting out of control. Interestingly, Dr. You is also using this circuit as a way of modeling changes in human populations in response to changes in resource availability.

What is the attraction of working at a medical center like Columbia?

Coming to Columbia was very attractive to me because it offers the opportunity to be in closer collaboration with clinicians. I always feel much more motivated to develop a new technology if I can see that it could have an impact on human health at the end of this process — even if it takes 5, 10, or 15 years. And that comes not just from basic science but also from clinical perspectives.

For example, I recently met with Wendy Chung, an expert in pulmonary hypertension at Columbia University Medical Center. We had an exciting discussion about how we might reprogram blood cells into smooth muscle cells, where we could create tissue-engineered blood vessels, using blood samples from patients, that she could use for her fundamental studies. If I didn’t have a good clinical perspective for this kind of technology, I would be building it in a vacuum. I might be able to design a tissue biofabrication method for creating blood vessels, which we published, but I wouldn’t necessarily know how it could be best used.

I feel an unavoidable sense that science has been growing in an exponential manner. This means that integration is becoming more and more difficult, but it’s also becoming more and more exciting, especially when you can bring different technologies together to solve a problem that would have been unimaginable in the recent past.