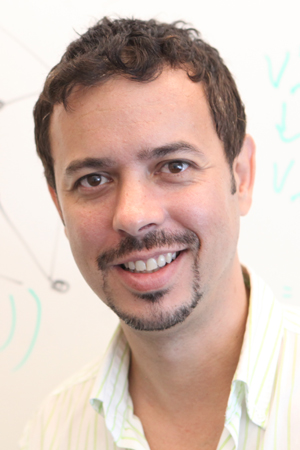 Systems Biology Professor Raul Rabadan, Phd , has been awarded a Philip A. Sharp Innovation in Collaboration award from Stand Up to Cancer (SU2C) , a group established by film and media leaders to fund cancer research projects that have the potential to quickly deliver new therapies to patients. Dr. Rabadan has received the award jointly with collaborator Dan A. Landau, MD, PhD, of Weill Cornell Medicine.

A theoretical physicist whose expertise lies in the cross section of mathematical genomics, tumor evolution, and cancer research, Dr. Rabadan will work together with Dr. Landau on their winning project, “Cupid-seq—high throughput transcriptomic spatial mapping of immune-tumor interactions in the micro-environment.”  The investigators will devise a novel sequencing technique and computational method for better understanding immune recognition mechanism in glioblastoma. Dr. Rabadan is currently a principal investigator on the SU2C-National Science Foundation Drug Combination Convergence Team and Dr. Lau is a 2016 recipient of a SU2C Innovative Research Grant.

The idea behind the Sharp Awards is to fund projects that involved SU2C researchers who have not yet worked together, including collaborations between members of Dream Teams, Research Teams, and Convergence teams, and between SU2C members and recipients of its innovative research grants. The latter are typically early-career investigators. The Sharp Awards are named after Sharp, Nobel laureate and institute professor at MIT and the Koch Institute for Integrated Cancer Research, to honor the emphasis he has placed on the importance of collaborative research.

Dr. Rabadan, who also is professor of biomedical informatics at Columbia University, is one of 10 recipients of this year’s Sharp Awards; investigators hail from the U.S., Canada, and the Netherlands, and projects are being funded from a pool of $1.25 million.

At Columbia, the Rabadan Group consists of an interdisciplinary team developing mathematical and computational tools to extract useful biological information from large data sets. Dr. Rabadan also is the founder and director of the newly established Program for Mathematical Genomics , a highly interdisciplinary center at Columbia that brings together researchers from the fields of mathematics, physics, computer science, engineering, and medicine, with the common goal of solving pressing biomedical problems through quantitative methods and analyses.