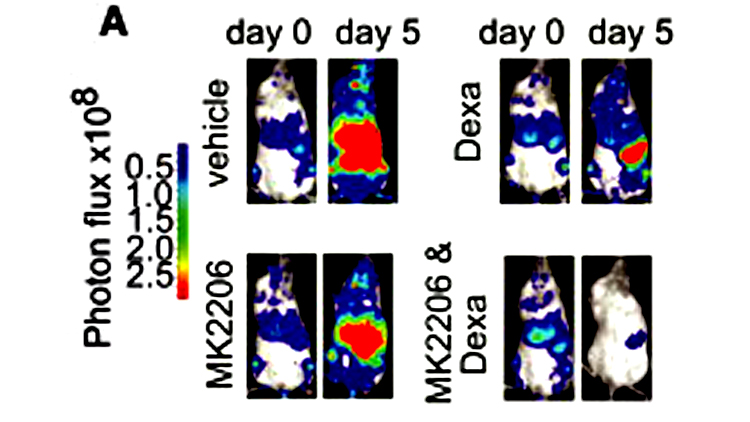 In a paper published in Cancer Cell, a team of researchers led by Adolfo Ferrando and Andrea Califano at Columbia University has identified the protein kinase AKT as a target for reversing resistance to glucocorticoid therapy in patients with acute lymphoblastic leukemia (ALL).

Glucocorticoids are a class of drugs that are widely used in the treatment of T-cell acute lymphoblastic leukemias (T-ALL). They work by inducing the death of the lymphoid progenitor cells that become diseased. The treatment is not always effective, however, because the cells targeted by the therapy can be resistant in some patients.

In an effort to identify signaling molecules that drive glucocorticoid resistance, Dr. Ferrando incorporated a computational approach in collaboration with Dr. Califano, chair of the Columbia University Department of Systems Biology. The Califano lab used new methods in network-based analysis to identify the master regulators of drug resistance; that is, the key molecular factors within the signaling pathways that cause resistance. First, they used the ARACNe algorithm to build a genome-wide network model of molecular interactions in T-ALL based on a database of 223 cases of the disease. They then analyzed tissue samples from 22 cases of glucocorticoid-resistant T-ALL and 10 cases of glucocorticoid sensitive T-ALL. Using the Master Regulator Inference algorithm (MARINa), they then interrogated this network and revealed nine candidate master regulators, three of which were subsequently validated experimentally. One of these was the gene AKT1, a key protein within the PI3K signaling pathway, a pathway that had previously been associated with glucocorticoid resistance.

In subsequent research led by Dr. Ferrando, an associate professor in the Departments of Pathology and Pediatrics, and a member of the Columbia University Department of Systems Biology, investigators conducted experiments to examine the role of AKT1 in glucocorticoid resistance. They showed that inhibiting the PTEN phosphatase — which inactivates AKT1 in the PI3K signaling pathway — activates AKT1, which can then interact with and inhibit the glucocorticoid receptor protein on T-ALL cells. They also characterized its mechanism of activity, determining that AKT1 phosphorylates the NR3C1 glucocorticoid receptor protein at serine 134, blocking the translocation of NR3C1 to the nucleus. This prevents glucocorticoids from regulating the specific targets that induce cell death.

This discovery led Dr. Ferrando to wonder whether inhibiting AKT1 could prevent glucocorticoid resistance. Researchers conducted an extensive set of experiments in cells, mouse models of T-ALL, and xenografts of leukemia in mice, comparing how the disease responded to treatment with an AKT1 inhibitor called MK2206 and dexamethasone, a commonly used glucocorticoid. All tests showed that when used alone, each of these treatments induced negligible cell death. However, when used together, a combination treatment involving both MK2206 and dexamethasone was effective in killing the tumor cells.