In a new paper published in the journal Cell, a team of researchers led by Dana Pe’er at Columbia University and Garry Nolan at Stanford University describes a powerful new method for mapping cellular development at the single cell level. By combining emerging technologies for studying single cells with a new, advanced computational algorithm, they have designed a novel approach for mapping development and created the most comprehensive map ever made of human B cell development. Their approach will greatly improve researchers’ ability to investigate development in cells of all types, make it possible to identify rare aberrations in development that lead to disease, and ultimately help to guide the next generation of research in regenerative medicine.

Pointing out why being able to generate these maps is an important advance, Dr. Pe’er, an associate professor in the Columbia University Department of Systems Biology and Department of Biological Sciences, explains, “There are so many diseases that result from malfunctions in the molecular programs that control the development of our cell repertoire and so many rare, yet important, regulatory cell types that we have yet to discover. We can only truly understand what goes wrong in these diseases if we have a complete map of the progression in normal development. Such maps will also act as a compass for regenerative medicine, because it’s very difficult to grow something if you don’t know how it develops in nature. For the first time, our method makes it possible to build a high-resolution map, at the single cell level, that can guide these kinds of research.”

High-resolution mapping of development at the single-cell level will provide a foundation for research on developmental disease and regenerative medicine.

Although conventional dogma characterizes development as a series of discrete steps, cells actually develop in a process of continuous transformation. As a cell matures, the complex and interconnected molecular programs that regulate its activity change gradually. These programs can also differ significantly among cells of similar type, and in many important regulatory cell types, rare aberrations in these programs can have devastating effects. Previously, it was difficult to observe these subtle differences in sufficient detail to distinguish them, but new technologies now offer important new opportunities.

Just as genome sequencing transformed how biology was studied in the previous decade, new technologies for analyzing the molecular properties of single cells are currently revolutionizing the kinds of questions many biologists are asking. Dr. Pe’er sees single-cell approaches as an important step beyond genomics. “DNA sequencing can identify genes and mutations, but often they are not studied in context,” she points out. “With single-cell approaches, we can map the cells where the action actually happens and what the genes are doing inside them. Single-cell mapping will do for development what genome sequencing has done for genetics.”

In the research described in the Cell paper, the investigators used an emerging technology called mass cytometry, which in a single experiment can measure 44 molecular markers simultaneously in millions of individual cells. This provides a wealth of data that can be used to compare, categorize, and chronologically order cells, and makes it possible to begin identifying the molecular systems responsible for development in much greater detail than was ever before possible. 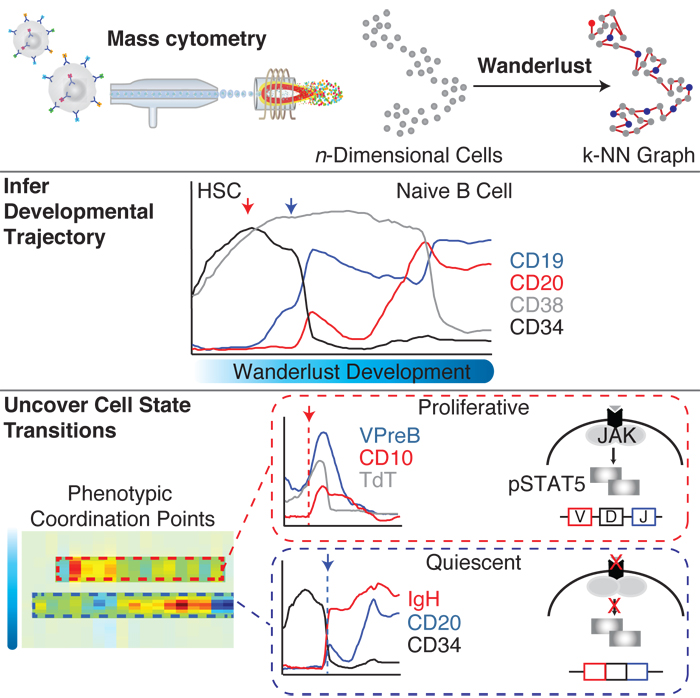 Investigating development in single cells. In (A) individual cells are profiled using mass cytometry, producing a high-dimensional data set in which n properties are measured in each cell. Wanderlust converts this data into a graph in which cells are represented as points connected to their most similar cells. Using this graph structure, Wanderlust is able to place each cell within its chronology of development. Once the cells have been aligned in the chronology, the plot in (B) shows how four key markers gradually change as a cell develops from a hematopoietic stem cell into a naïve B cell. In (C) the newly inferred trajectory reveals previously unrecognized rewiring of regulatory signaling and coordinated changes that can now be recognized as hallmarks of developmental progression. Courtesy of Dana Pe'er, Columbia University.

Taking advantage of this complex single-cell data also required the researchers to develop new mathematical and computational methods for interpreting it. Just as one can represent a physical object in three dimensions — length, width, and height — the Pe’er lab’s approach involved thinking of the 44 measurements as a 44-dimensional geometric object. They then developed a new computational algorithm, called Wanderlust, which uses mathematical concepts from a field called graph theory to reduce this high-dimensional data into a simple form that is easier to interpret.

Such a high-dimensional geometry is impossible for us to visualize, and so Wanderlust converts the collection of measurements of important developmental markers in each cell into a single one-dimensional value that corresponds to the cell’s place within the chronology of development. By including all of the hundreds of thousands of cells that were profiled, this graph does not force cells into categories, but represents a continuous new geometry that captures the entire developmental trajectory. The researchers can then use these trajectories as a scaffold for characterizing the order and timing of molecular and regulatory events during the developmental process and understand how the process unfolds in health and disease.

According to Dr. Pe’er, “For years, mathematics has been used in physics to show that there are very elegant mathematical relationships that define the way the universe is structured. When looked at from the perspective of mathematics, we see that the complexity found in biology is also beautifully structured and patterned. Our body has trillions of cells of countless different types, each type bearing different molecular features and behavior. This complexity expands from a single cell in a carefully regulated process called development. This regulation creates patterns and shapes in the high-dimensional data we measure. By using Wanderlust to analyze these data we can find the pattern and trace the trajectory that cellular development follows.”

To test their approach, the researchers studied development in human B cells, a type of cell that is important in the adaptive immune response and is involved in a variety of autoimmune diseases as well as certain types of cancer. Since immune cells continue to develop throughout adult life, even a single sample from one bone marrow contains cells from all stages of B-cell development. Investigators in the Nolan lab used mass cytometry to profile 44 markers in a cohort of approximately 200,000 healthy immune cells that were gathered from one such sample. In each cell they measured cell surface markers that help identify what type of cell it is, as well as markers inside the cell that can reveal what the cell is doing, including markers for signaling, the cell cycle, apoptosis, and genome rearrangement.

In a sign of the high degree of precision that Wanderlust offers for studying single cells, the researchers also report that they identified rare, previously unknown signaling events involving the signaling protein STAT5 that occurred in just 7 out of 10,000 cells. This regulatory event is involved in the process of VDJ recombination, a volatile time when the B-cell is reshuffling its own DNA. Further laboratory experiments showed that disrupting these signaling events using kinase inhibitors fully stalled the development of B cells.

Identifying and characterizing the regulatory checkpoints that control and monitor cell fate can have many practical applications, as many diseases result from imbalance in the cell types produced by the immune system. Thus, the approach that the authors describe can produce insights that could be used for the development of new diagnostics and therapeutics.

This process for mapping how healthy cells develop can be applied not just to B cells, but to any type of cell. As the authors suggest, their method offers the possibility of providing a foundation for studying normal development as well as the processes responsible for any kind of developmental disease. In the future, they anticipate that more sophisticated models could be built that would be capable of representing even more complex systems, such as the entire immune system. The holy grail would involve creating a complete map of every cell type in the body and how each progressively develops from a single stem cell, pinpointing every cell fate decision along the way.

Achieving this goal will require a lot more work, but as Dr. Pe’er points out, “This current project is a landmark both in the study of development and in single-cell research, and has completely changed the way I think about science. A fire has been lit, and these findings are just the tip of the iceberg of what is now possible.”